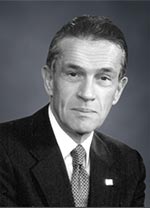 J. Nicholas “Nick” Hahn held several positions at Cotton Incorporated and has the distinction of leading the company twice; as both the second and fourth President and CEO. Hahn built on the marketing legacy of Dukes Wooters, the first President of Cotton Incorporated, and elevated the Company’s marketing efforts to new levels of sophistication.

Talks about his involvement in the development of the Seal of Cotton trademark and The Fabric of Our Lives® television campaign.