There are many freely available irrigation scheduling tools that predict when to irrigate based on weather and crop conditions.

The weather data is used to calculate an amount of water that would be evaporated by a reference crop such as grass, and then a crop coefficient is used to scale that reference value to a specific crop. Crop coefficients for western conditions have been obtained from lysimeters in Arizona and Texas. Current studies are using lysimeter studies in Louisiana, Mississippi and South Carolina to determine cotton crop coefficients for more humid conditions. Most of these programs are based on the water balance method described in the next section.

Scheduling irrigation using a water balance, or checkbook method, is based on the available water in the soil. Like a checkbook, inputs are credited to the total soil water, and withdrawals are debited from the soil water. The net daily water balance is then:

The inputs to the soil water are rainfall and irrigation. Withdrawals include transpiration through the plant, evaporation from the soil surface, and deep percolation into lower soil layers. During the growing season, evaporation and transpiration, commonly termed “evapotranspiration” and abbreviated “ET,” are the most important processes by which water is removed from the soil (Figure 7.1). Deep percolation accounts for only very minor withdrawals during the growing season, and so is assumed to be negligible. 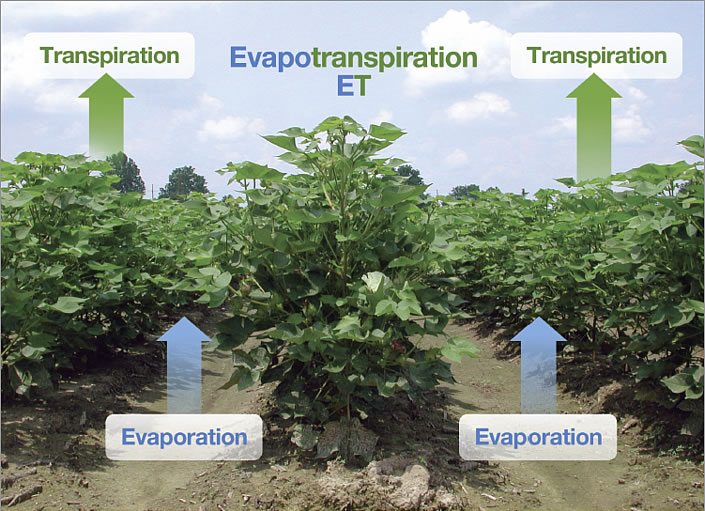 Figure 7.1 – Loss of water from a crop field during the growing season results primarily from evaporation from the soil surface, and transpiration through the plant leaves. These processes are termed “evapotranspiration” and commonly abbreviated “ET”. 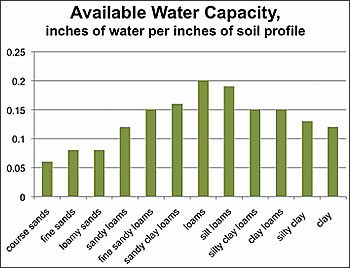 Figure 7.2 – The water in the soil that is available to the plant changes with soil texture. Sandy soils and clay soils have less plant-available water than do loamy soils.

The water balance equation requires knowledge of the available water in the soil. Determination of subsequent soil water level is dependent on the initial soil water content. Soil water is dependent on the texture of the soil. Sandy soil has larger particles and pores that hold the water less tightly, reducing the soil available to plants. Conversely, clay soils have many, very small pores. The clay particles bind the soil water more tightly. While clay soils hold more water than sandy soils, less of the water is available to the plant because of the tight binding. Loamy soils have good pore space to hold moisture and do not bind the soil water tightly enough to prevent plants from extracting the water. These soils have more water available to the plant (Figure 7.2).

The extent of soil drying is also dependent on soil texture. After a soaking rain, soil is saturated, meaning that all the pores between soil particles are filled with water. The saturated soil dries because water percolates to lower depths and evaporates from the soil surface. Two to three days after saturation, soil is said to be at “field capacity.” At this water content, the soil pores have a mix of air and water. The soil will continue to dry until it reaches a point termed the “permanent wilting capacity.” At this level, the water remaining in the soil is no longer available to the plant, and the plants will wilt.

Irrigation scheduling is a method of maintaining soil water available to the plants in the range between field capacity and permanent wilting point. In the water balance approach, the initial soil moisture is estimated based on soil texture. The water in the soil is then tracked using the daily changes in water use and water inputs.

The inputs to the crop system can be accurately measured. Rainfall is measured using individual rain gauges in the field, or tipping bucket rain gauges on a weather station. Irrigation can be measured directly or estimated from the total amount of water applied over a given area. The outputs from the system are more difficult to measure exactly and are usually estimated.

Crop water use can be estimated in several ways. A standard method that has been developed estimates a reference evapotranspiration from weather parameters (Allen, et al., 1998). The reference ET is then converted to the crop ET using crop-specific coefficients. Alternatively, methods have been developed that estimate ET from curves developed from years of field measurements. These empirical methods can be quite accurate, but are specific for the location from which the data was collected. 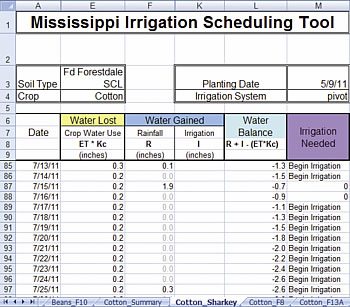 Figure 7.3 – Screen capture of the Mississippi Irrigation Scheduling Tool, MIST. MIST uses water balance to estimate when irrigation is required. The need for irrigation is indicated when soil moisture falls below a level set by the user based on their soil and irrigation system. Crop water use is calculated using the Modified Penman-Monteith equation and crop coefficients developed for Mid-South growing conditions.

The Mississippi Irrigation Scheduling Tool relies on the most current scientific knowledge of crop water use to assist producers in making irrigation decisions. The system is designed to be easy to use and access. Rather than requiring the user to take readings in the field and input data, MIST automatically collects information from national and regional databases and continuously calculates crop water use. Information on soil hydrology and texture are downloaded from the Natural Resource and Conservation System, based on the spatial location of the fields. Field information can be input by the user, or downloaded automatically from information collected by FSA. Weather information is updated automatically from weather stations located throughout the state and maintained by the Delta Research and Extension Weather Center. Spatially accurate rainfall information is automatically downloaded from the National Weather Center gridded rainfall data, or can be input by the user if they so choose. To handle differences in field runoff, MIST uses the NRCS runoff equations. This gives a more accurate indication of within-field soil moisture following a rain event. No soil or plant measurements are required to run the scheduler. Automatically downloading information from these databases allows growers to use MIST, without requiring extensive data collection or input to the model.

With MIST, there are no programs to install or maintain. The program is accessed through the internet, and is available on several platforms, including smart phones, tablet computers, laptops, and desktop computers. This allows the user to determine crop water needs from any location, and instantly tell when a crop needs water. Using a daily time-step for calculations and weather updates allows a more accurate determination of soil available water. Use of a daily time step also allows calculations to determine future crop water needs over the next several days, allowing growers to better manage their water resources.

The user selects a minimum water deficit, based on their irrigation system capacity. MIST indicates when an irrigation is needed based on the soil type, weather conditions, and capacity of the irrigation system. A final output of water used is available at the end of the season, and can be used for reporting to NRCS and water management districts to document water conservation.

The MOIST Program (University of Tennessee)

Most water-balance, irrigation-scheduling programs function in a similar manner, but the means of data input and the representation of the output can be very different. The Management Of Irrigation Systems in Tennessee (MOIST) program from the University of Tennessee requires weekly input of rainfall and irrigation instead of daily data. This is easier for producers to maintain and thus keep track of the needed rainfall and irrigation amounts. The approach works fine for the more drought-tolerant row crops that are grown in the good water-holding soils of West Tennessee; however, weekly input may not be adequate for water-sensitive crops grown in low water-holding soils like sands. 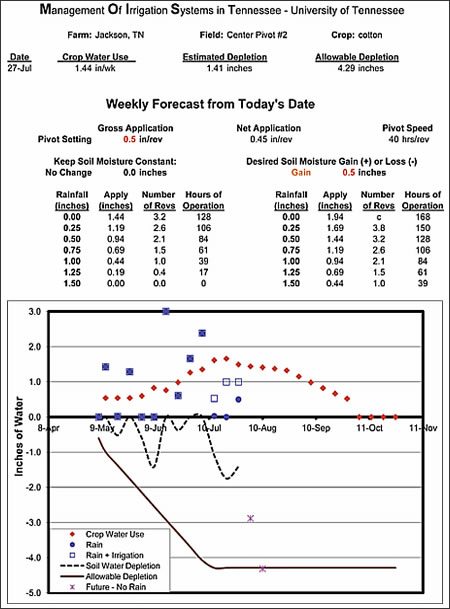 Figure 7.4 – Output from the MOIST program.

MOIST also provides a graphical output in addition to a table format as shown at the bottom of Figure 7.4. The red diamonds represent weekly crop water use in inches and the pattern of increasing water use as the crop canopy expands and temperature/solar radiation increases is easily identified. During the dry period shown in mid July, cotton water use was calculated at 1.7 inches per week. The solid blue dots represent weekly rainfall and, up until the beginning of July, rainfall exceeded or nearly equaled crop water use, resulting in very little soil water depletion shown by the dashed black line. During this time, rainfall maintained soil water with only a 1.5 inch depletion of water below field capacity for this soil.

The soil represented here is a deep silt loam that can store 4.3 inches of readily available water as shown by the solid brown line labeled allowable depletion. It is not until mid – and late-July that irrigation is required due to the lack of rain and the high cotton water use rates. Two inches of irrigation were applied at this time to maintain the soil water depletion at 1.5 inches. Irrigation plus rainfall is represented by the open blue squares. For center pivot irrigation in good water-holding soils, 1.5 inches of soil water depletion is a good target because center pivots are designed to keep up with crop water use and not to catch up or replenish the soil profile. Drip and furrow irrigation systems could allow depletion closer to the maximum allowable depletion because they may be designed to apply more water in a single irrigation event. At the present depletion of 1.5 inches, there is still enough soil storage capacity to capture a sizeable rainfall event and enough buffer to sustain the crop if the center pivot is not able to apply water for an extended period. The pink stars represent the predicted soil water depletion if no irrigation or rainfall occurs in the next one week and two weeks, respectively.

MOIST also provides a forecast type of output (upper portion of Figure 7.4) so that center pivot irrigators can have a plan of action once they update data into the program. In this example, the producer plans to apply 0.5 inches per revolution. If he wants to maintain his soil water depletion at around 1.5 inches, he would make 3 revolutions in the upcoming week if no rainfall occurs and 2 revolutions if 0.5 inches of rainfall occurred according to the columns on the left side of the page. If he wants to increase the amount of soil water in the profile by 0.5 inches, he would have to operate continuously for the whole week if there was no rainfall and make 3 revolutions if 0.5 inches of rain occurred according to the column on the right side of the page. The amount of gain or loss in soil water can be adjusted according to the producer’s management goals, but this forecast also shows that it is difficult to increase soil water with a center pivot system during the middle of a growing season. This forecast type of output allows a producer to schedule irrigation without having to go back to the MOIST program every time a rainfall or irrigation event occurs.

Water balance programs are great irrigation scheduling tools because they predict water use on a whole field basis and are not particular to one small location in a field when a crop is adequately watered. A producer should always feel confident that they know how much water is needed to replace the water being used by their crop when using a water balance approach. However, there are some limitations that one should be aware of. For instance, most water balance programs assume that excess water in a soil quickly drains to field capacity and this is not true of all soils. Also there can be run-off from intense rainfall events and if the entire rainfall amount is entered into the program, a water balance approach will not automatically recognize that the entire rainfall amount did not enter the soil profile.