We have updated our Terms and Conditions and Privacy Policy with important information about our collection and use of your data and your data privacy options.
skip to main content
› Cotton Production › Cotton Production Research › Agricultural Engineering › ENSO and Cotton Yield Variability

The El Niño Southern Oscillation (ENSO) phenomenon is the strongest driver of inter-annual climate variability around the world and exerts a substantial influence on the climate of cotton production areas in the United States. ENSO phases are characterized by sea surface temperature anomalies in the eastern equatorial Pacific Ocean. When sea surface temperature (SST) is higher than normal the phenomenon is referred as El Niño, and when the sea-surface temperature is lower than normal, the phenomenon is referred to as La Niña. Neutral is the term for when neither El Niño nor La Niña are present in the Pacific. Although El Niño and La Niña return every 2 to 7 years, the tropical Pacific can be thought of as neutral, or near normal, a majority of the time. It is important to recognize that ENSO affects the climate in the northern hemisphere primarily during the fall, winter, and early spring months of the year but still may impact summer crops in certain regions of the United States. The main goal of this report is to evaluate the influence of ENSO on cotton yield variability.

USDA, National Agricultural Statistics Service (NASS) county-level, lint yield data for upland cotton were used in the analysis. Historical crop yield data integrates a number of factors such as technological advances (improved varieties or management, shifts from rainfed to irrigated production) and price cycles. The data needs to be processed to separate the effects of seasonal climate variability from other factors that tend to change more slowly. To reduce the impact of these factors, a linear trend line was fit to county level yield data to allow better evaluation of the effects of climate variability on cotton yield (an example of the trend line for a single county is shown in Figure 1).

The analysis of potential ENSO effects on cotton yield was done by averaging yield variations (i.e., residuals) from the linear trend line for El Niño and La Niña years on a county-by-county basis. Residuals were defined as the percent difference of the observed yield from the expected yield (fitted line). A positive residual indicates a good crop year since the actual yield is higher than the trend line or, in another words, above the expected yield. On the other hand, negative residuals indicate below average or bad crop years. Maps of average residuals for both El Niño and la Niña years were created for each of the states studied. It is important to recognize that regional averages are a good indication of potential effects of ENSO phases but it does not provide the probabilistic information that is required when dealing with effects of climate variability on crop yield.

Data from 1965 to 2005 were used in the analysis, and counties where cotton has not been grown in the last five years or where at least ten years of data were available were excluded. 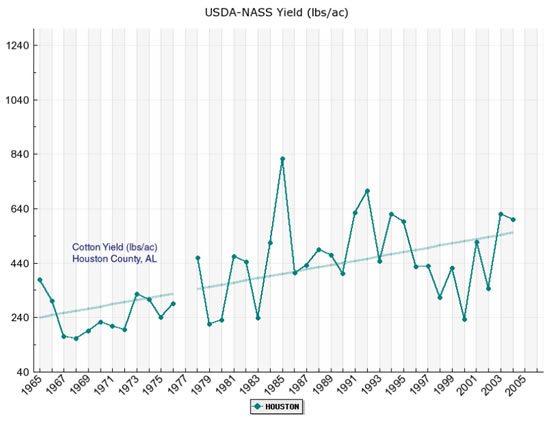 Figure 1. Cotton yield for Houston County, AL according to the USDA-NASS database.

Figures 2 to 4 show average deviations from the yield trend line during neutral, El Niño, and La Niña years, respectively. From these figures it appears in neutral years, most states along the east coast and Alabama gulf coast experienced better than average yields, while Texas experienced below average yields, and yield were fairly typical in the mid-south states. Climate during neutral years is highly variable and results should be taken with caution. During El Niño years, areas in the southeast tend to have lower yields, while yields tend to be higher in the midsouth. In La Nina years, yields are reduced in both the mid-south and southeast states, with trends less clear in Texas. These results suggest producers may use climate forecast to adjust expected yield goals for the season. For example, a farmer in west Texas should expect above normal yields in an El Niño year and adjust fertilizer and seeding rates accordingly. Additional research is current under way to determine how significant the yield differences are during ENSO phases and what additional climate-derived indices can help predicting cotton yields.

This information can also be useful when planning how to distribute acres among crops. The Southeast Climate Consortium maintains information on the impact of ENSO events on major crops in the southeast. You can also find an update of the current ENSO phase at that site.