Irrigation brings a set of management challenges and opportunities. In general, irrigated fields require more intensive management, not only due to the need to schedule irrigation, but also due to the ability to manage water stress in the field. Early season irrigation can reduce soil crusting and improve plant stands. Also, as discussed in Section 5, careful control of water stress early in the season can reduce the need for plant growth regulators later in the season. It should be noted that, in general, irrigation will increase yield potential, so fertilizer requirements will also tend to increase, particularly nitrogen.

An advantage of irrigation not commonly considered is the ability to activate herbicides after application. With herbicide-resistant weeds, timely activation of residual herbicides can be guaranteed with pivot irrigation systems. This can also apply to fertilizer applications, especially side-dressed nitrogen. With the proper equipment, irrigation can also be used to deliver fertilizers and some crop production products.

Acreage of irrigated row crop land has consistently increased during the last 20 years in the Mid-South and Southeast where rainfall typically exceeds evapotranspiration each month of the year, although episodic hot and dry periods frequently occur. This increase has occurred despite the significant costs of irrigation (approximately $600 to $800 per acre to purchase and install a 125-acre pivot) and the challenge of irrigating irregularly shaped and sloped fields. Thus, land owners and growers must already recognize the economic benefit from irrigation in row crops and the stability it brings to modern farming enterprises. Regardless of whether the driver for this irrigation expansion is $6/bushel corn or $14/bushel soybeans, maximizing irrigation benefit to cotton in the Mid-South and Southeast requires a careful consideration of the benefits and detriments of supplemental irrigation. Unlike in California and Arizona, where rain is unlikely during the growing season and full irrigation is the norm, in the Mid-South and Southeast rainfall MUST be considered in making irrigation decisions and is strictly supplemental to rainfall. The following chart identifies the uses and risks of irrigation during the growing season and is expanded upon in each of the following paragraphs. 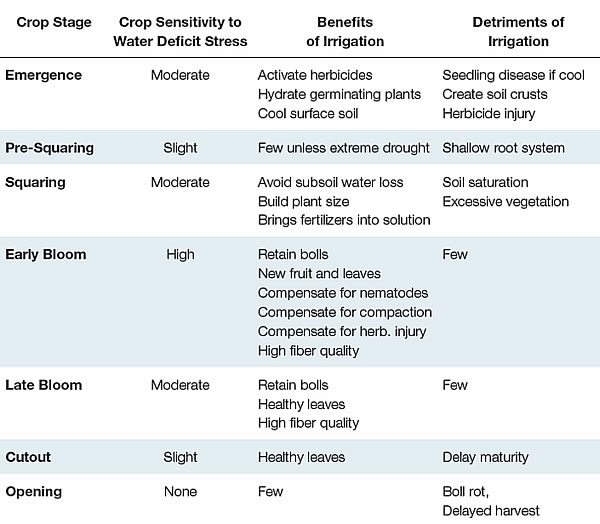 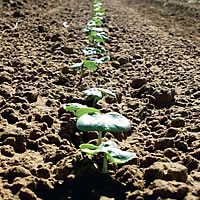 Seedbed moisture is essential for germination and emergence. Pivot sprinkler irrigation can enhance these processes by providing moisture for root and hypocotyl expansion, by softening surface crusts and by cooling the surface of sandy soils during periods of extreme heat. Frequent and small (one-quarter to one-half inch) irrigations are appropriate when the weather is hot but should be avoided when the weather cools and are not usually necessary after full seedling emergence. Irrigating emerging and seedling cotton during cool weather promotes seedling disease. Pivot sprinkler irrigation is also highly useful in activating pre-emergence herbicides. Typically, 0.2 to 0.75 inch is sufficient to move pre-emergent herbicides into the soil where they are protected against photo degradation and are activated to control germinating weeds. Unfortunately, frequent rain or irrigation can also move herbicides into cotton’s root zone, causing phytotoxicity.

Row watering planted but not emerged cotton fields is difficult unless water control, bed shape and field slope allow subbing into the planted zone with overtopping the beds. 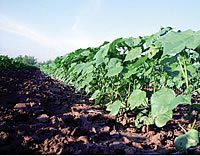 Irrigation is rarely needed in Mid-South and Southeast cotton during the pre-squaring period, although irrigation could alleviate stress during severe hot and dry periods. During the pre-squaring period roots are expanding into new soil at over twice the rate that shoots are expanding, and in most fields are able to provide sufficient water to support maximum seedling growth of the small leaf area. Frequent irrigation prior to bloom may limit the rooting depth by restricting soil oxygen or by promoting shallow root. Roots proliferate in soil favorable for growth (i.e., warm, moist, friable, non-toxic, and containing sufficient oxygen and nutrients). If these conditions are maintained near the soil surface then root expansion in the subsoil will be limited and the plant will be vulnerable to periodic drought during the bloom phase. 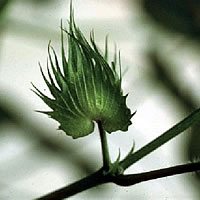 During the squaring period, the root volume and most of the harvestable fruiting sites are created. Plant stress during this period can limit both of these and place an upper limit on yield, especially for earlier maturing varieties that tend to set a larger proportion of fruit on lower nodes, and are thereby less likely to recover from stress. Severe water-deficit stress, to the point of plant wilting, should be avoided during this time period. In sandy or low-water infiltration fields with limited irrigation capacity (less than ~5 gpm per acre), care should also be given to avoid depleting subsoil moisture reserves that will be needed during the bloom period. Varietals and season length differences should also be considered in water management of squaring cotton. Water deficit stress during the squaring period is more injurious to the yield of early maturing and more determinate varieties in long growing seasons. Excess water, and lack of soil oxygen, is a more likely problem during squaring than water deficit stress, since the limited plant size and cooler temperature restricts water use. If surface soils remain saturated for an extended period of time, plant growth is curtailed and fruit may be shed. 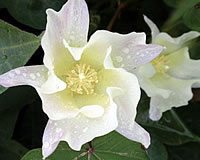 During this period, daily water use, daily fertilizer use, and sensitivity to water-deficit stress all increase. Retention of small bolls (less than ¾ inch) is the most sensitive crop stage to water-deficit stress such that the key yield-enhancing benefit of irrigation is to avoid water-deficit stress during bloom. A secondary benefit is the quick activation and/or delivery of nitrogen fertilizer to under-fertilized cotton fields. Although sprinkling during the morning hours will cause some pollen rupture reducing seed set, boll size, and boll retention when water contacts open blooms prior to midday, this detrimental impact has been shown to be slight compared to the benefit of maintaining a healthy photosynthetic capability and sustaining new leaves, new squares and new bolls. Where shallow soils, acid soils, nematodes or compaction limit root function, maintaining ample soil water during early bloom is essential for high yields.

Once cotton has reached cutout or the last effective bloom date, water deficit stress can usually be increased gradually such that new vegetative growth is curtailed but healthy turgid (non-wilting) leaves are maintained until over half of the bolls are mature. Irrigation interval and soil moisture deficit should be increased during this period to minimize the cooling associated with evaporation and to prevent waterlogging under rainy conditions. Avoiding irrigation when bolls start to open will lessen canopy humidity and resultant boll rot or hard lock. A dry surface and subsoil also facilitates soil surface drainage which minimizes harvest delays and soil compaction from field traffic after heavy rains.

Cotton growers now manage anywhere from a few hundred to a few thousand acres. Due to equipment limitations, a grower cannot plant all acres at a single time, much less plant significant acreage immediately after a rain. Irrigation is critical when planting into limited soil moisture during hot, dry weather. Having irrigation capacity on some fields allows for a larger proportion of dryland acres to be planted soon after a rainfall event, while the irrigated acres can be planted at any time. For late-planted or double-cropped cotton (generally cotton planted behind wheat), immediate emergence and rapid seedling growth is critical and days lost while waiting on a rain will invariably reduce yield. Additionally, irrigation enables producers to develop and retain the earliest set bolls which boost yield in a compressed season often observed in later-planted cotton.

Another management consideration for irrigating cotton includes variety selection and positioning. Modern cotton varieties vary widely with regard to maturity, boll distribution, drought tolerance, need for growth regulation, and yield response to irrigation. Although most, if not all, cotton varieties respond positively to supplemental irrigation when encountering dry weather, some varieties respond differently to increased irrigation rates or to deficit irrigation. Research has shown that some varieties (primarily later-maturing varieties or ones with drought-tolerant characteristics) show little to no yield penalty associated with deficit irrigation unless extreme high temperatures and prolonged drought occurs. In contrast, other varieties (typically earlier maturing varieties that set a higher proportion of bolls on lower nodes) are touted to respond to greater amounts of applied water. With the variation between cotton varieties in their yield response and growth characteristics to water, growers can position varieties into appropriate fields and environments. Later-maturing varieties or those that are less injured by water-deficit stress are ideally positioned into fields with reduced irrigation capacity (large pivots, restricted application amounts, severe runoff, low water-holding capacity soils) while varieties that set bolls lower on the plant can be positioned into fields with greater irrigation capacity.