Phymatotrichopsis root rot (also known as cotton root rot, Phymatotrichum root rot, Texas root rot and Ozonium root rot) is a major fungal disease of cotton occurring within large areas of Texas and Arizona, causing annual losses in Texas alone of up to $29 million. The causal fungus is soilborne and has a host range of more than 1800 dicot plants. This disease only occurs in the southwestern United States and several northern states of Mexico. There has been no expansion of geographic range of the disease within North America.

Diagnosis and Impact
The disease develops late in the spring or early summer, as soil temperatures approach 82°F. About a day before the onset of visible symptoms , the leaves of infected plants feel noticeably hotter than surrounding, non-infected plants. The first visible symptom is wilting (Fig. 1), which becomes permanent by the third day, followed quickly by death of the plant. The leaves remain attached to the plant and have no other distinguishing symptoms, while the roots, including the main root, are rotted (Fig. 2), and plants can be pulled easily from soil.

There is white to brown fungal growth on the surface of main roots near the lower stem, consisting of strands and a loose, cottony growth just below the soil surface (Fig. 3). Wilt is usually seen when plants are flowering, sometimes earlier in the season, but not when plants are seedlings. A large number of plants may wilt simultaneously, but even within an affected area, wilting among plants is not simultaneous, sometimes occurring weeks apart. It is also possible to see non-symptomatic plants surrounded by diseased plants. 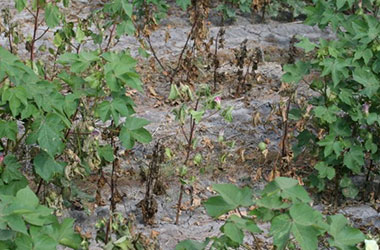 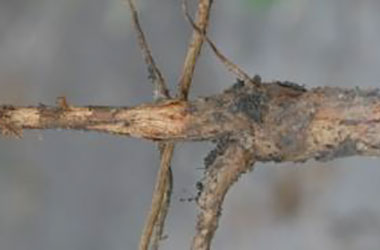 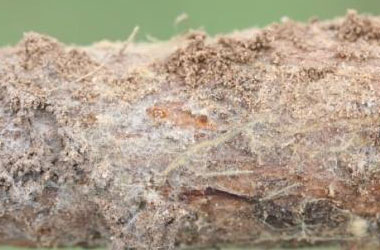 Fig. 3 Growth of cotton root rot fungus on root and base of stem.

As the disease progresses, distinct dead spots can be seen within the field (Fig. 4). The number and size of these spots vary and do not follow a pattern, except that they are somewhat circular, unless different spots coalesce. There may be one spot in the field, or possibly, nearly the whole field is affected. Affected areas of the field increase in size following rain or irrigation. Where this disease occurs, the soils are not uniformly infested. A unique feature of the disease is its consistent recurrence within discrete areas of the field, which changes slightly, from year to year, depending upon crop rotation and weather. In dry years, diseased areas may be smaller, or even absent.

In addition to a direct loss in yield because of premature plant death, the disease reduces lint and seed quality and decreases harvest efficiency. In fields with extensive root rot, harvest may require a picker rather than a stripper, which can clog frequently because rotted plants are easily pulled from the ground.

In the vicinity of diseased plants, the fungus may produce spore mats on the surface of soil, usually following rain or irrigation during the summer. Mats are 2 to 12 inches in diameter and 1/8 to ½ inch thick and are initially white (Fig. 5), becoming creamy white to tan, as they dry out. The fungus also produces sclerotia, which are seed-like survival structures, produced in soil, away from the host roots. 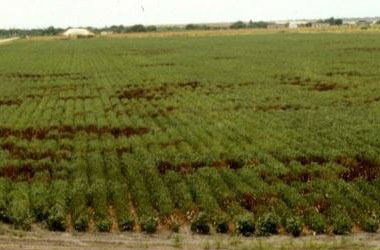 Fig. 4. Appearance of cotton root rot in a field. 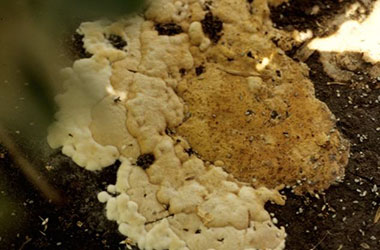 Factors Affecting the Disease and Fungal Survival
This fungus can survive many years in soil as sclerotia, which can occur at depths of 7 feet. Sclerotia germinate and produce strands that grow through soil and eventually contact roots. The strands colonize the root. When there is extensive rot near the base of the stem, wilt can be seen. The fungus uses nutrients from the rotting roots to produce more sclerotia in soil. New strands will grow to infect other plants, usually within a row rather than between rows. The spore mats have no role in disease or fungus survival.

The disease is confined to alkaline soils, particularly calcareous, montmorillonitic clays. Although strands can grow through acidic soils, sclerotia are not formed in them. The disease is prevalent where the annual mean temperature is 60°F or higher and is not found in areas where the air temperature goes below -9°F. Sclerotia are killed by exposure to 9°F for 24 hours. These soil and temperature factors probably limit where the disease can occur.

The growth of the fungus and disease development is favored by moist soil conditions (field capacity or slightly drier) and high temperatures (60 to 95 F).

The fungus is a poor saprophyte and it does not persist in dead plants. In addition to causing disease in an extremely broad host range of dicots, the fungus can also infect roots of monocots and use them as food for sclerotia production. Although monocot infection may result in some root rot, plants survive because of the extensive root system associated with monocots. Sclerotia can survive for years in soil.

Management
Until recently, there has been no effective control for this disease. There is no known host resistance in any type of cotton. There have been many cultural approaches evaluated for managing the pathogen, but they have been ineffective or marginally effective for providing temporary disease reduction. With the exception of flutriafol, chemical approaches, including soil fumigants, have been ineffective or impractical.

Current control approaches are as follows:

The information given herein is for educational purposes only. References to commercial products or trade names are made with the understanding that no discrimination is intended and no endorsement by Texas AgriLife Extension Service personnel is implied.

Educational programs of the Texas AgriLife Extension Service are open to all people without regard to race, color, sex, disability, religion, age, or irrational origin.