We have updated our Terms and Conditions and Privacy Policy with important information about our collection and use of your data and your data privacy options.
skip to main content
› Cotton Production › Cotton Production Research › Plant Pathology › Site-Specific Management of Cotton Root Rot Using Airborne and Satellite Imagery and Variable Rate Technology

Cotton root rot, caused by the soilborne fungus Phymatotrichopsis omnivora, is a destructive disease. The fungus propagates from structures that germinate from as deep as 18 inches in the soil. The fungus grows through the soil surface, infects roots, eventually girdling the stem, and killing the plants. In the field the visible damage is seen at specific points and increases outward in a radial pattern. Frequently the disease has a clustered pattern (Fig. 1). Consequently, severely diseased areas may represent less than 50% of the of the field. Airborne imagery of infested fields, taken over multiple years, shows that although the disease may be of greater extent in wet years than in dry, the points where the disease begins are highly conserved and the affected areas are stable across years (Fig.2).

Topguard® (flutriafol) fungicide was used in Texas from 2012 to 2015 to control cotton root rot under Section 18 Emergency Exemptions from Registration. As a result, growers reduced cotton root rot incidence, and achieved higher yields and better fiber quality. In early 2015, Topguard Terra®, a new, more concentrated formulation developed specifically for soil application, was registered to manage the disease. Growers generally treat their fields uniformly even though only portions of their fields are infested. However, the spatial nature of cotton root rot, its highly visible damage, and its reoccurrence in the same areas year after year make it an excellent candidate for site-specific management (Fig. 2). The consistent pattern of cotton root rot incidence provides the producer with an opportunity to use historical airborne imagery for making site-specific treatments.

Considering the cost of the fungicide that is now about $50/acre at the full rate, site-specific treatment can be very beneficial in many fields. For example, consider the field in Fig. 2; if only 40% of the area is treated, the savings from reduced fungicide use would be approximately $7500 ($50/acre × 250 acres × 60% nontreated) per year. Based on our aerial surveys conducted in Texas, root rot infested areas within fields vary from near 0 to up to 75%, but most fields only have about 20-40% of their areas infested. Uniform application may still be useful under conditions of extremely widespread infestation; however, site-specific management of this pathogen holds significant promise to increase efficiency and reduce cost. 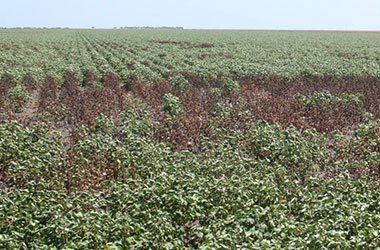 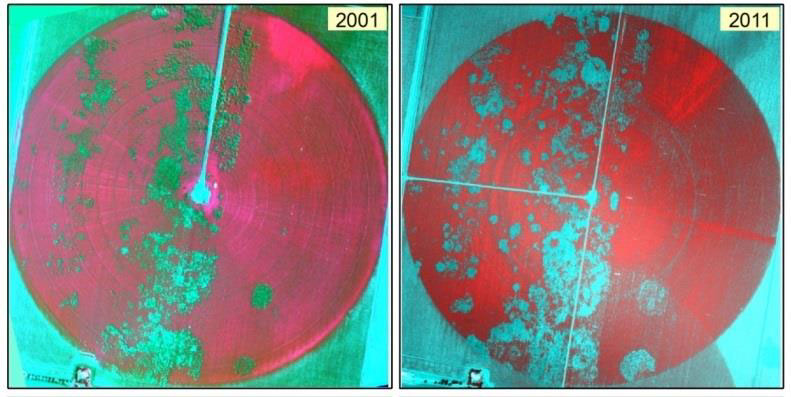 Selecting Airborne and Satellite Imagery
Remote sensing is the most practical means for accurately mapping cotton root rot because of the large numbers of infested areas and their irregular shapes within fields. Airborne imagery has been successfully used to map the extent of cotton root rot infestations near the end of the growing season and before defoliation, when cotton root rot damage is fully pronounced.

Airborne imagery has high spatial resolution (usually about 1 m or finer), but its availability varies by location and year. The National Agriculture Imagery Program (NAIP) administered by the USDA Farm Service Agency collects 1-m four-band imagery during the growing season in the continental U.S. Airborne imagery can be searched and ordered for specific areas of interest at https://www.fsa.usda.gov/programs-and-services/aerial-photography/imagery-products/imagery-catalogs/index.

In our experiments, 2-m GeoEye-1 satellite scenes with four spectral bands (blue, green, red and near-infrared) were used to create prescription maps. Table 1 shows some satellite sensors that offered high resolution multispectral imagery before 2012, when growers in Texas started using Topguard, which has tended to obscure the damage patterns caused by cotton root rot. For nontreated cotton fields, imagery acquired in any year can be selected. In addition to the listed satellite sensors, several newly-launched satellites including WorldView -3 and -4 can be used.

Creating Prescription Maps
Once an airborne or satellite image is selected (Table 1), a software package is required to convert the image to a prescription map in a format (e.g., shapefiles) that a variable rate control system can accept. Many producers, crop consultants, and agricultural dealers already have image editing and processing software products such as Trimble Ag Software (Farm Works®), SST Software®, or AgLeader SMS®. Some of these software products can be used to process imagery and create prescription maps.

Even if your software cannot automatically identify cotton root rot areas, it will generally allow you to manually digitize polygons around infested areas. This approach sounds primitive, but it works, in case that is the only option you have. QGIS® is a free software package that can perform image processing and create prescription maps. Software and documentation may be downloaded at www.qgis.org.

We evaluated eight image classification techniques for mapping and detecting cotton root rot from airborne multispectral imagery. All eight methods appear to be effective and accurate. We chose to use unsupervised classification applied to multispectral imagery or to the normalized difference vegetation index (NDVI) image because it can be implemented without the need for complex image processing capability. Using this method, the multispectral image or the NDVI image can be classified into root rot infested and non-infested zones. To accommodate the year-to-year variation in the expansion of the disease, buffer zones with distances of 10-33 ft (3-10 m) around the infested areas were added as part of the treatment areas in the prescription maps (Figs. 3-5).

Adding buffers around the infested areas can significantly increase the areas to be treated as shown in Figs. 3-5. The selection of the optimal buffer distance depends on factors such as infestation pattern, image availability of a single season or multiple seasons, planting swath, and the producer’s risk tolerance.

Some non-infested areas, as shown in the lower-right corner of the field in Fig. 4, can be misclassified as root rot in the classification map. It is important to visually ground truth the areas classified as damaged by cotton root rot, especially at field margins or around standing field objects.

Figure 3. An airborne color-infrared image (left), a corresponding two-zone classification map (center), and a prescription map with a 10 ft buffer (right) for a 30 acre cotton field near San Angelo, TX. The green areas in the prescription map were treated with Topguard Terra Fungicide at 8 fl oz/acre of product (full rate) with 6 gal/acre of water. 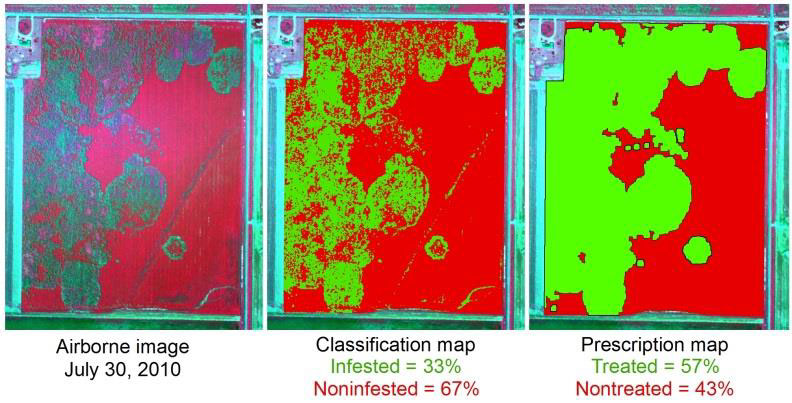 Figure 4. An airborne color-infrared image (left), a corresponding two-zone classification map (center), and a prescription map with a 16 ft buffer (right) for a 112 acre cotton field near Edroy, TX. The green areas in the prescription map were treated with Topguard Terra Fungicide at 4 fl oz/acre of product (half rate) with 6 gal/acre of water.

Figure 5. A GeoEye-1 color-infrared composite image (left), a corresponding two-zone classification map (center), and a prescription map with a 33 ft buffer (right) for a 101 acre cotton field near Edroy, TX. The green areas in the prescription map were treated with Topguard Terra Fungicide at 8 fl oz/acre of product (full rate) with 6 gal/acre of water.

Adapting Variable Rate Control Systems
Variable rate controllers have been commercially available for decades. Some tractors are already equipped with a controller that can perform variable rate liquid application. For our field studies, two commercially available controllers were selected and adapted to two tractors that were already equipped with a GPS-based guidance system. The additional components required for each variable rate control system cost $4000-5000 plus the
installation.

A John Deere variable rate control system consisting of a controller, a servo valve, a flowmeter, and a shutoff valve was integrated with the John Deere GreenStar (GS) 2 Display and the StarFire RTK GPS receiver already mounted on a John Deere 8230 tractor owned by a producer near Edroy, TX, in 2015 (Fig. 6). A transparent flow divider was used to distribute the flow evenly to the shanks of each row unit of a twelve row 38-in planter.

A Trimble Field-IQ spray control system consisting of similar control components was integrated with the Trimble FMX Display and the StarFire RTK GPS receiver already mounted on a John Deere 8210 tractor owned by a producer in San Angelo, TX, in 2015. The flow was evenly distributed to the shanks of each row unit on an eight row 40-in planter. 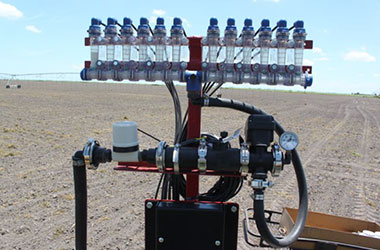 Figure 6. A variable rate control system consisting of a controller, a servo valve, a flowmeter, and a shutoff valve integrated to a John Deere tractor equipped with John Deere GS2 Display and StarFire RTK GPS.

Site-Specific Fungicide Application
Topguard Terra should be applied according to its labeling. (See the Topguard Terra label for specific application instructions.) Before field application, the tractor and planter must be appropriately configured and the control system calibrated to deliver the target rate.

The prescription maps in shapefiles need to be loaded to the displays and converted into an acceptable format. Both the John Deere and Trimble displays require the shapefile to be in WGS84 geographic projection (i.e., latitude and longitude). The shapefile should contain three mandatory component files with a common filename prefix and the filename extensions .shp, .shx, and .dbf.

For example, to convert a shapefile to an acceptable format using the John Deere display, the three component files need to be saved in a folder named RX on a flash card. Once the shapefile is loaded in the Shapefile Conversion Homepage on the GS display, it will be converted to the accepted format with the summary information and prescription map showing on the display. If the conversion fails, possible errors need to be identified and corrected.

Experiment Results
Based on two years of field experiments in treated areas, the fungicide effectively controlled the disease. Root rot started showing up in treated areas toward the end of the growing season in the field treated at the half rate of 4 fl oz/acre (Fig. 7). This late infestation did not cause a significant yield loss because most of the bolls were fully developed by that time. Moreover, root rot was seen in a few nontreated areas within the field. These additional areas can be added to the prescription map for the coming years. Root rot damage in nontreated areas right across the entire western border of the field can be clearly seen from the dark areas in the 2015 image (Fig. 7). Root rot also occurred in a few treated areas toward the end of the season in the field treated at full rate (Fig. 8). Again, this late infestation had little effect on yield.

Summary
Historical airborne and high resolution satellite imagery provides a useful data source for documenting cotton root rot infestation and can be used to generate effective prescription maps for precise management of the root rot. Variable rate controllers can be easily adapted to existing tractors/planters/applicators for implementing site-specific Topguard Terra Fungicide applications. Image processing is a specialized field and requires more advanced computer skills and an understanding of the techniques involved. If you are uncomfortable performing the tasks of image processing and prescription map generation, an image processing service or an agricultural dealer may be hired to create prescription maps for you. As long as only portions of your fields are infested with cotton root rot, and they can be effectively quantified, it is worth the effort to employ site-specific management techniques for controlling cotton root rot. Benefits can include a significant reduction in disease control costs and reduced use of fungicides in the environment.