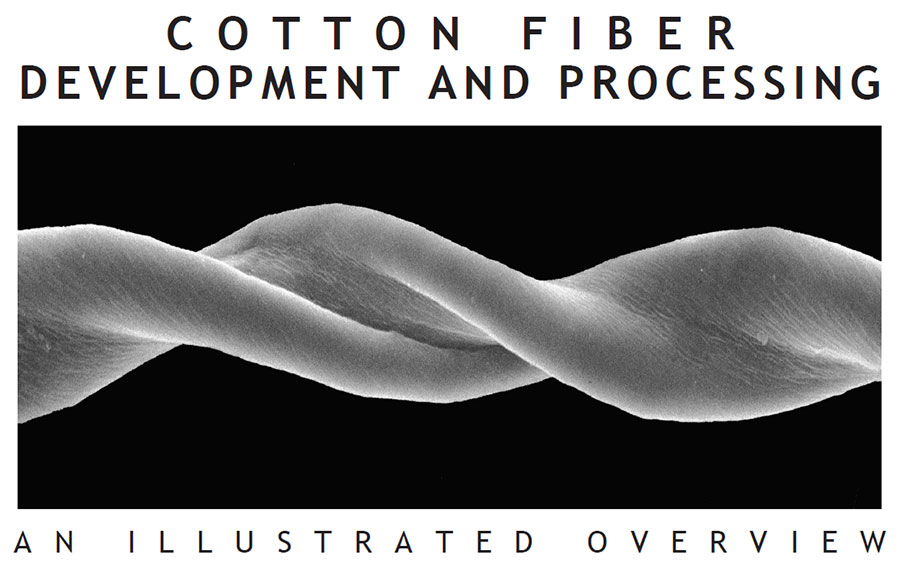 When we hear the word “cotton”, pleasant memories and mental images of soft sheets and comfortable garments run through our head. From the earliest historical times, cotton has had a significant role in many of the world’s human cultures. Even the Egyptian pharaohs had cotton. Our modern day word for “cotton” is derived from the old Arabic word “al qatn”.

Unknown to most people is the true miracle of the cotton fiber, especially its origin and biological characteristics. Each cotton fiber is a single plant hair. Each hair is only one single cell that develops from the surface of a cotton seed with each seed producing from 10,000 to 20,000 fibers. The presence of hairs on plant seeds is not an unusual event, but the characteristics of the seed hairs on the wild plants that became cotton are unique. They alone, of the world’s plant hairs, have the combination of length, strength and three dimensional structural characteristics in the dried state that enable them to be spun into yarn or thread.

This book provides an illustrated summary of the developmental and structural features of the cotton plant and fiber, and of the machines that have been developed around the utilization of cotton. The pictures and discussions have been donated and compiled by a group of dedicated cotton enthusiasts to convey some of the beauty and unusual features that contribute to the unparalleled utility of cotton fibers so that the general layman can develop an appreciation of the wonder of cotton.

The development of seed hairs with structural characteristics that enabled them to be spun into yarn or thread has occurred only once in nature. This was in an ancient line growing on the African continent in the cotton genus now known as Gossypium. This ancient line diverged into at least three different species that retained the ability to produce the unique seed hairs. Over time each of these lines migrated to different parts of the world.

One species became established in southern Asia and is now known as Gossypium arboreum. A second is found wild in southern Africa and is known as Gossypium herbaceum. The third apparently does not survive today but indirect evidence indicates that it managed by some means to cross the ocean to the Western Hemisphere between 1 and 2 million years ago. During the time this immigrant was able to grow in the West- ern Hemisphere, it hybridized with one of the native Gossypium species and the chromosomes in that hybrid doubled in number. This resulted in a new polyploid species that had a complete set of both the African species chromosomes and the New World species chromosomes. When combined with the native American species, the new arrival retained the ability to produce spinnable fibers, resulting in a vigorous hybrid line that became established and radiated out to different parts of the Western Hemisphere. 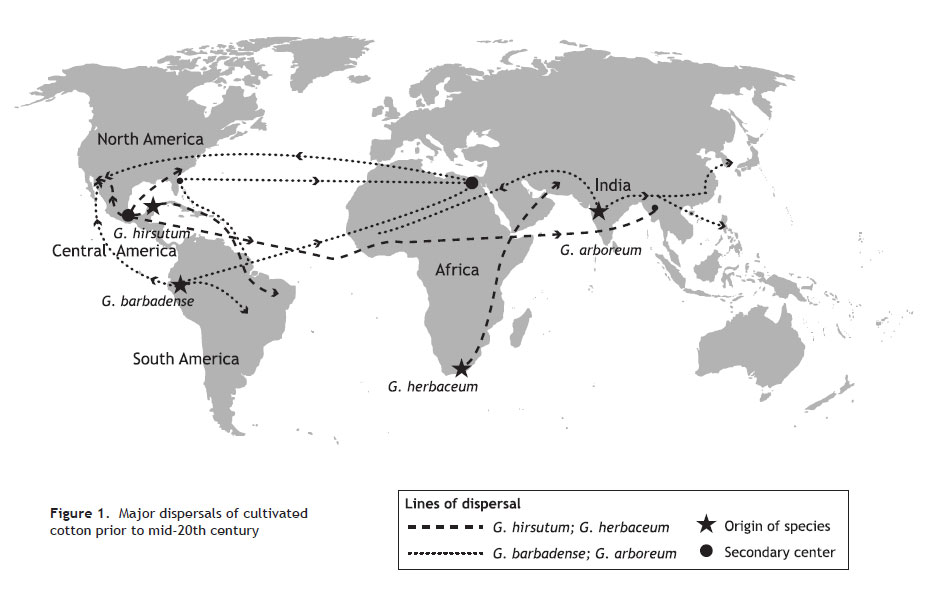 Following migration of the polyploid to new areas (Figure 1) and subsequent isolation there was divergence into 5 species, each with seed hairs. Today these species are known as G. darwinii native to the Galapagos Islands, G. mustelinum native to northeast Brazil (Figure 2), G. tomentosum native to the Hawaiian Islands (Figure 3),
G. barbadense native to Peru, and G. hirsutum native to the Yucatan Peninsula. 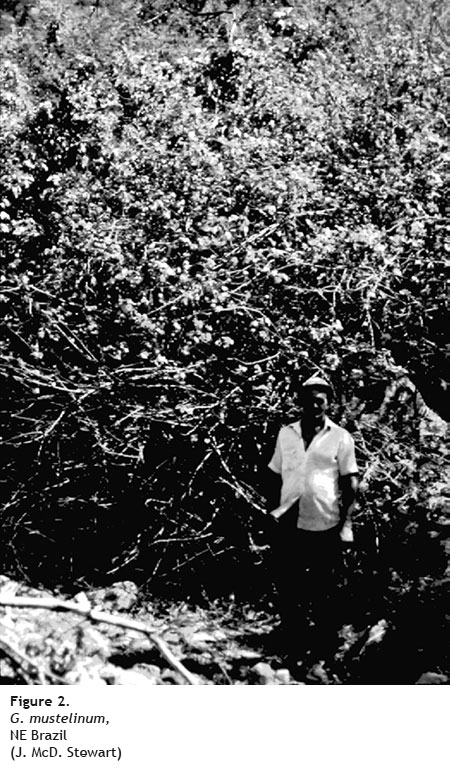 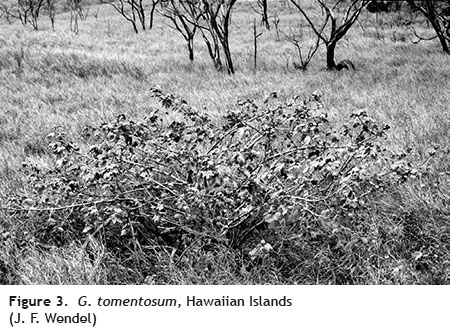 Our early ancestors originally “domesticated” from wild native plants all crops and food plants that we take for granted today. Cotton is no exception. A remarkable testimony to the importance of cotton to human enterprise is the independent domestication of four different Gossypium species in four different parts of the world. Two of these species are the “Old World” or “Asiatic” cottons. These were direct descendents of the ancient line that evolved seed hairs with the characteristics that enabled humans to spin them into yarn. Our best evidence suggests that G. herbaceum was first cultivated in southern Africa while G. arboreum (Figure 4) probably was domesticated on the Indian subcontinent. These two species were the cottons of early human civilization in Asia and Egypt. One of the first archeological discoveries of cotton usage was in the Moenjo Daro ruins (Figure 5) of present-day Pakistan. This city was a thriving commerce center 5,000 years ago. Without doubt, the woven cotton materials found in the ruins were one of the Asiatic species. 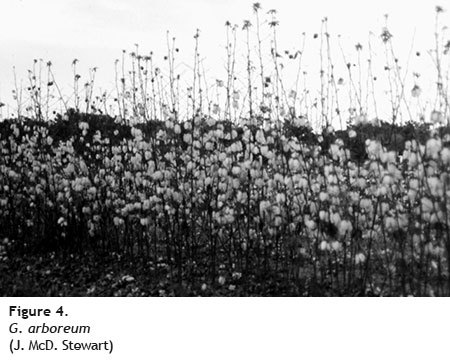 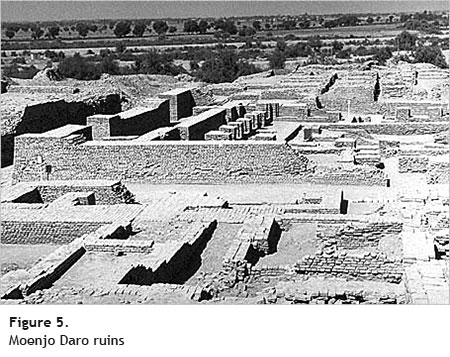 On the other side of the world two other Gossypium species were being domesticated at about the same time.

These species were derived from the “polyploid” hybrid of the New World. The earliest archeological evidence found, thus far, of cotton domestication in the Western Hemisphere is its use in fishing net cordage by indigenous peoples along the coast of Peru. These sites were dated to about 3,000 years ago. The species G. barbadense is native to Peru and probably is the species of cotton used by the fishermen. Studies on the migration of this species out of Peru suggest that humans carried it over the Andes, across the Amazon Basin, and into the Caribbean Islands, long before Europeans arrived.

At various periods in the last 300 years, and especially the last 200 years, this species was carried to various parts of the world and grown as a commercial crop. Breeding and selection in this species resulted in varieties known for their superior fiber quality. Included among these are the Sea Island cottons of the southeast coastal islands of the USA and the Caribbean Islands, the Pima cottons of the American southwest, and the Egyptian-American cottons. Collectively, these are called the long-staple cottons and are known for their long, fine fibers with exceptional tensile strength.

The second species that was domesticated in the Western Hemisphere was G. hirsutum, native to the northern coast of the Yucatan Peninsula.

(Figure 6). There is little archeological evidence of domestication, but this species was destined to become cultivated throughout the world and today comprises 90% of the world cotton production. By the time Europeans arrived in the Western Hemisphere, this cotton had been carried into present day central Mexico, southward through Guatemala and northward as far as the southwest USA. Regionally adapted landraces of G. hirsutum evolved in several of these regions (Figure 7). 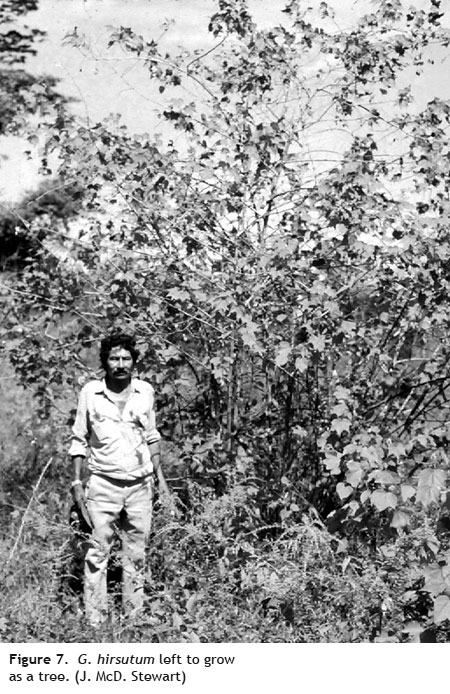 Two of the landraces became especially important to the development of modern varieties of this species. One landrace known as “punctatum” was carried to Asia, probably by the British, and became known as Cambodian cotton. Until introductions from the USA in the second half of the 1900’s, most of the G. hirsutum grown in Asia, including India and Pakistan, were derived from this landrace. The landrace that has contributed most to USA varieties is “latifolium”. This material was brought to the USA in the 1700-1800’s. Breeding and selection within this material resulted in the general class of cotton known as “upland” or “short staple” cotton.

One of the most important discoveries and introductions was cotton types that were day-neutral. Part of the problem of cotton production in the early history of the USA was the perennial and photo periodic nature of G. hirsutum landraces of Central America. This means they only bloomed when the day length was less than 12 hours. The cottons bloomed very late in the growing season in the temperate areas of the southern USA, so they did not have time to develop more than a few mature bolls before cold weather killed the plants. Discovery of day-neutral types allowed perennial cotton native to tropical regions to be grown as an annual crop with good yields in the southern temperate areas of the USA.

Breeding and selection can be considered as a continuation of the domestication process. A wild genetic source has been selected and genetically manipulated over the centuries to give rise to modern cotton varieties with economy of yield and fiber characteristics that are unsurpassed by any other textile, nature or synthetic. These characteristics and the industry that has grown up around them are the subject of this book.