We have updated our Terms and Conditions and Privacy Policy with important information about our collection and use of your data and your data privacy options.
skip to main content
› Cotton Production › Cotton Production Research › Plant Pathology › Diagnosis and Management of Foliar Diseases in the United States

Foliar Symptoms: Ascochyta Blight forms lesions on cotyledons, leaves, stems, and bolls. Lesions on the cotyledons and leaves approach 2 mm (<0.1 in) in diameter, are white to light brown and circular in shape. Elongated cankers on the stem are reddish-purple to black or ash gray in color. Small, black fruiting structures are likely to be embedded in symptomatic tissue. 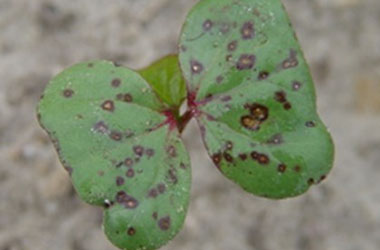 Management: Use fungicide treated seed, avoid planting in cool wet weather, and incorporate cotton residue to encourage decomposition, which helps in fields with a history of Ascochyta Blight.

Diagnostic Note: Margins of necrotic regions on leaves and cotyledons will have dark borders. Spots may have a target-like appearance. However, Ascochyta Blight typically occurs early in the season, and small black fruiting structures are observed in the lesions.

Range and Yield Loss: Ascochyta Blight has been reported in most major cotton producing regions. Yield loss is rarely reported, but is possible under conditions such as prolonged cloudy weather with cooler temperatures and rainfall.

Foliar Symptoms: Symptoms of Bacte-rial Blight start as tiny water-soaked spots, and progress into characteristi-cally angular shapes due to leaf veins limiting bacterial movement. Lesions appear on the upper side of the leaf, turn black as they expand, and defoli-ation may occur. Systemic infections follow the main veins as black streaks; symptoms on the bolls are characteristically sunken, water-soaked lesions. 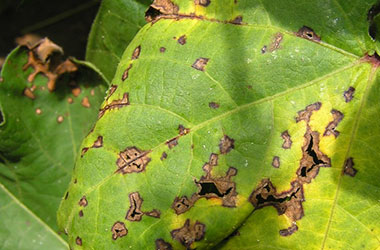 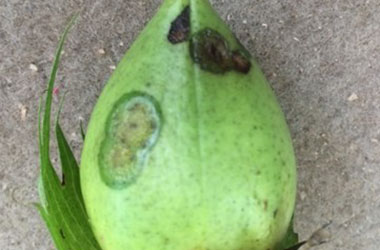 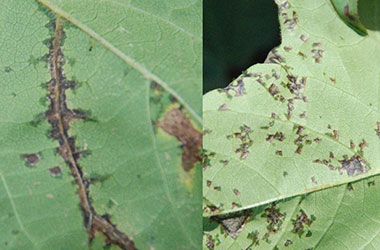 Management: Resistant cultivars are the most economical option to minimize yield loss. Incorporation of infected residue into the soil will help with decom-position of infected debris and reduce inoculum in the soil.

Diagnostic Note: Lesions are typically dark brown (darker than many other pathogens) and can be “shot-holed” in appearance when necrotic tissue falls away. Observe the underside of the leaf for water-soaking around the lesions.

Range and Yield Loss: Bacterial Blight is a major disease of cotton. Since acid delinting of cottonseed in the U.S., Bacterial Blight has been rare, except in OK and TX; however, there is a recent resurgence in additional states. Yield loss can be severe, up to 20%, depending on variety and pathogen race.

Foliar Symptoms: Characteristic symptoms of Target Spot include brown lesions, sometimes approaching 2 cm (~1 inch) in diameter, exhib-iting a series of concentric rings. Unlike Stemphylium and Alternaria Leaf Spot, the spots are typically not bordered by a dark band. Leaf spots and premature defoliation are generally confined to the interior canopy (unlike that found in Stemphylium and Alternaria diseases.) 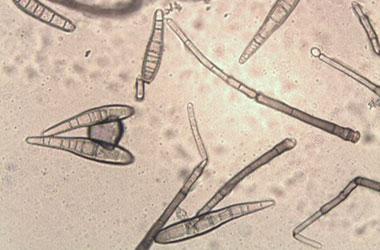 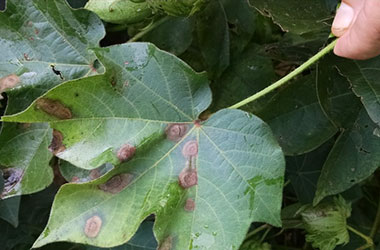 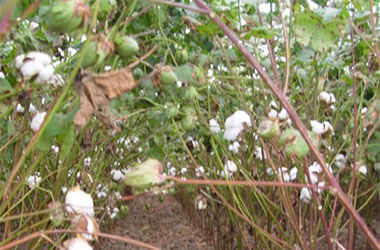 Management: Management of Target Spot with fungicides is made difficult by the dense canopy which obstructs placement of fungicides in the interior of the canopy. Some success in managing Target Spot has been achieved by applying fungicides during both the 1st and 3rd weeks of bloom.

Diagnostic Note: Target Spot can be quickly differentiated from Stemphylium Leaf Spot by location in the canopy. Also, defoliation from Target Spot typically begins at the bottom of the plant and progresses upwards. Lesions may occur in the upper canopy, but defoliation of the upper 20% has not been observed

Range and Yield Loss: Target Spot has become progressively more wide-spread in the Southeast and Mid-South regions of the Cotton Belt, but is most severe in Florida, Alabama and Georgia. In severe cases, yield losses exceeding 200 lbs lint/A have been documented

Foliar Symptoms: Reddish lesions will occur during the early stages. As the disease progresses, the lesions enlarge and turn white to light brown in the center. The lesions are circular and vary in size. Concentric zones are often present with a red color at the margins. 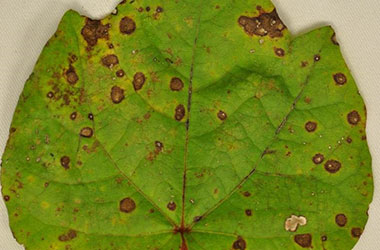 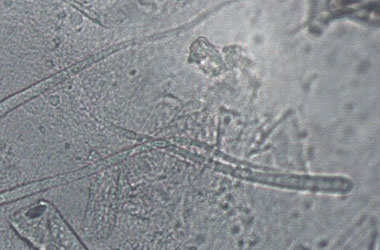 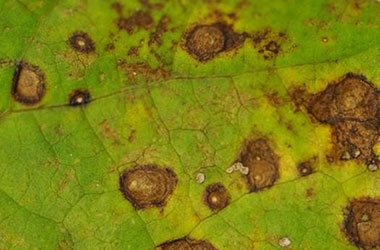 Diagnostic Note: In the field it is often difficult to differentiate Cercospora Leaf Spot from other foliar diseases.
The spots appear concentric, like those of Target Spot, and the general distribution of spots on the plant may be the same as Stemphylium and Alternaria Leaf Spots. Correct diagnosis often requires viewing the long, thin whip-like, septate spores. Caution should be taken as C. cassiicola spores can appear similar to Target Spot, but typically are broader and may have a basal scar.

Caused by: A. macrospora, A. alternata

Foliar Symptoms: Alternaria Leaf Spot forms lesions on senescing leaves that are brown with purple margins. As lesions expand they typically exhibit concentric zonation and the necrotic tissue will overlap with other lesions. As the disease progresses the lesions will become gray and dry with some of the necrotic tissue falling out giving it a “shot-holed” appearance. 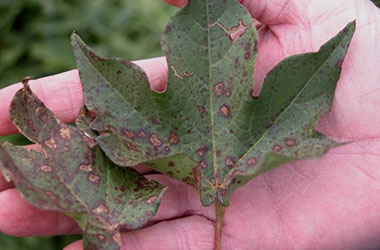 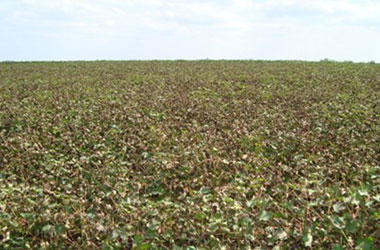 Range and Yield Loss: Alternaria is one of the most common cotton diseases and is associated with late season cotton development. (Note: Alternaria and Stemphylium Leaf Spots are similar in that both are most severe when cotton plants have insufficient potassium, either from inadequate fertilization or dur-ing periods of drought.) Yield loss is not considered a problem with Alternaria Leaf Spot if symptoms and defoliation occur late in the season.

Foliar Symptoms: Stemphylium Leaf Spot lesions are 2 cm in diameter (~1 inch), circular in shape and brown in color with concentric zones. As lesions mature they will develop a whitish center that may crack and fall out producing a “shot-holed” appearance. The lesions normally form on the up-per leaves in the canopy and start at the leaf margin and move inward. Fields where Stemphylium Leaf Spot is severe also typically demonstrate symptoms of nutrient deficiency. 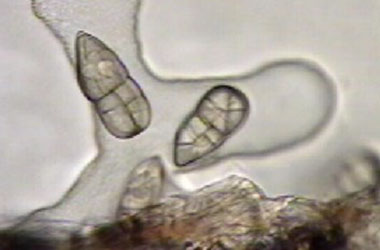 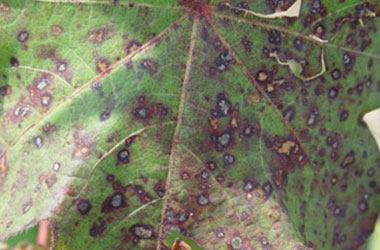 Foliar symptoms of Stemphylium leaf spot. Note the “ashy” centers of the spots and the reddening of the leaf associated with stress on the plant. 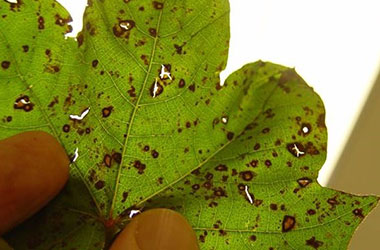 Management: Managing for vigorous crop growth by irrigating to avoid drought stress, proper fertilization, and reducing pest pressure will help reduce the incidence of disease outbreaks. Fungicides are available, but are not normally economical for the control of Stempyhlium Leaf Spot.

Range and Yield Loss: Stemphylium Leaf Spot has been found in all the cotton producing areas of the U.S. Since this disease is normally associated with other plant stress factors (drought, nutrient deficiencies, nematode and insect pressure) yield loss can be severe from the stress complex.

Foliar Symptoms: Small lesions appear on leaves in the lower canopy late in the growing season. The lesions, 3-4 mm (~0.15 in) wide and restricted by a major leaf vein, are slightly chlorotic on the upper leaf surface with a white mildew growth on the lower surface. Lesions may become necrotic and resemble bacterial blight. In severe cases, premature defoliation will occur. 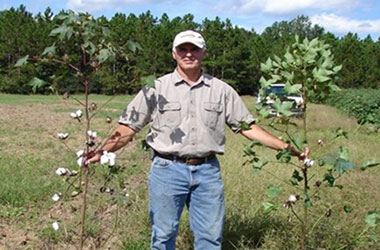 Premature defoliation from Areolate Mildew in Appling County, GA. Plant on left was not treated. Plant on right was treated twice with a strobilurin fungicide.

Management: Use of resistant varieties is the best control strategy for Areolate Mildew. Incorporating crop resi-
due and crop rotation will help reduce inoculum for next season. Fungicides (e.g. azoxystrobin and pyraclostrobin) were effective in managing this disease in Georgia.

Diagnostic Note: No other cotton disease commonly observed will have the white, powdery growth on the underside of the leaf.

Range and Yield Loss: Areolate Mildew is observed in most countries where cotton is produced, but not commonly observed in the U.S. In Georgia, the disease is typically restricted to the extreme southeastern counties. This disease normally appears late in the season and usually causes little yield loss.

Key to differentiating spots in the cotton fields:

1A. Borders of spots often defined by leaf veins, creating angular or geometric appearance: Go to 2
1B. Border of spots not defined by leaf veins and approximately circular in shape: Go to 3
2A. Typically observed late in season; often a white sporulation is found on the underside of spots: Areolate Mildew.
2B. Spots dark in color, may appear early in the season and often have a “water-soaked” appearance: Bacterial Blight/Angular Leaf Spot.
3A. Spots affect foliage throughout the plant, especially on upper leaves. Spots typically associated with plants affected by nutrient deficiencies or stress: Stemphylium, Alternaria or Cercospora Leaf Spots. Submit to dis-ease diagnostic clinic for further diagnosis.
3B. Spots often with concentric rings and not associated with symptoms of nutrient deficiencies or stress: Go to 4
4A. Spots found typically on young plants and with dark, pepper grain-like sunken structures: Ascochyta Leaf Spot.
4B. Spots with concentric rings on older plants: Go to 5
5A. Spots with concentric rings, typically found on leaves within the canopy of foliage: Target Spot.
5B. Spots with concentric rings possibly surrounded by a yellow halo: Identification requires additional diagnosis and a sample should be submitted to a plant disease diagnostic lab for confirmation.