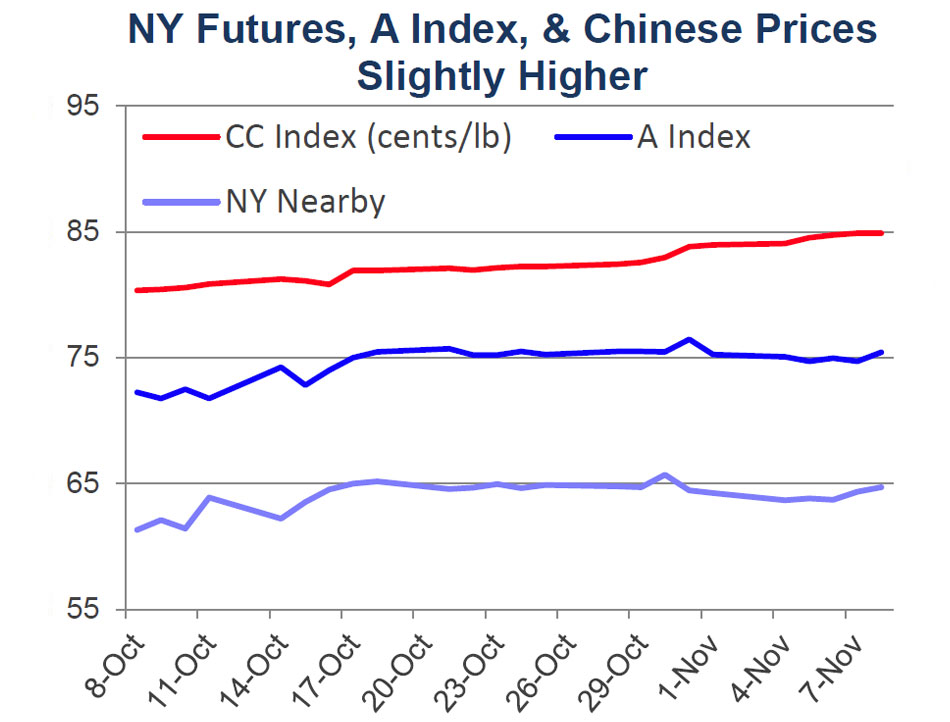 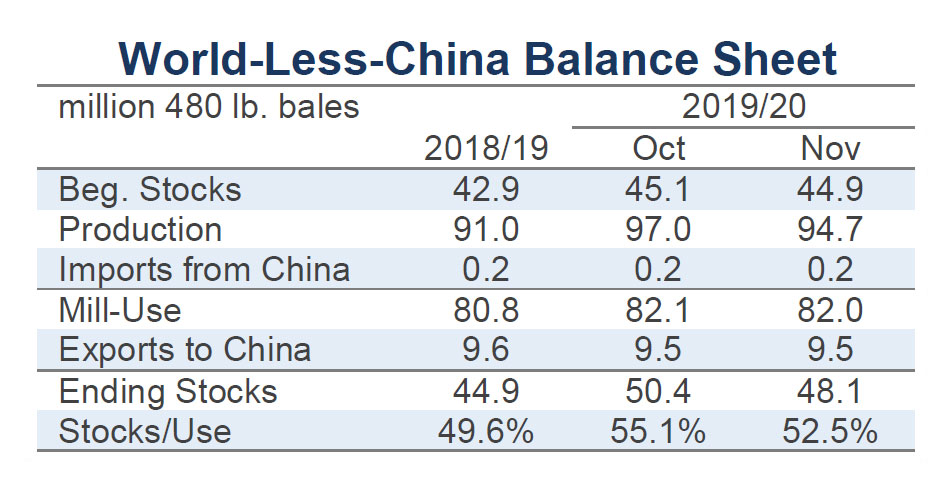 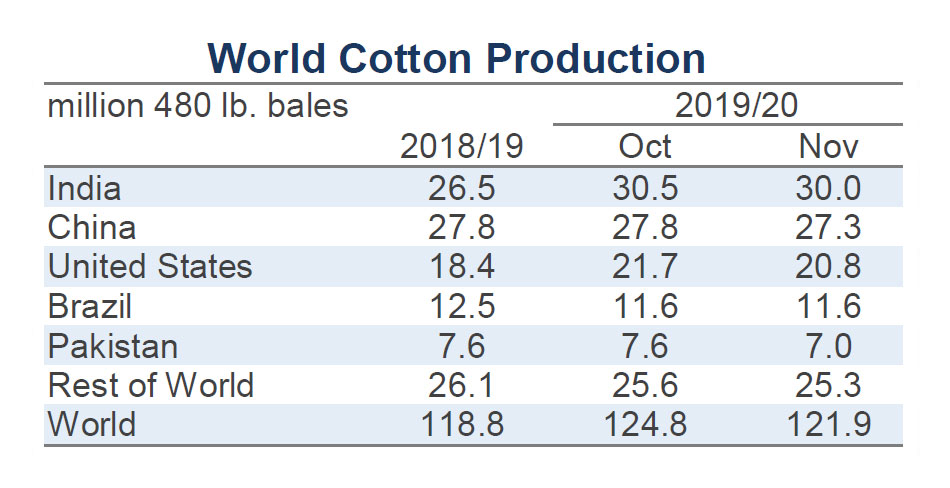 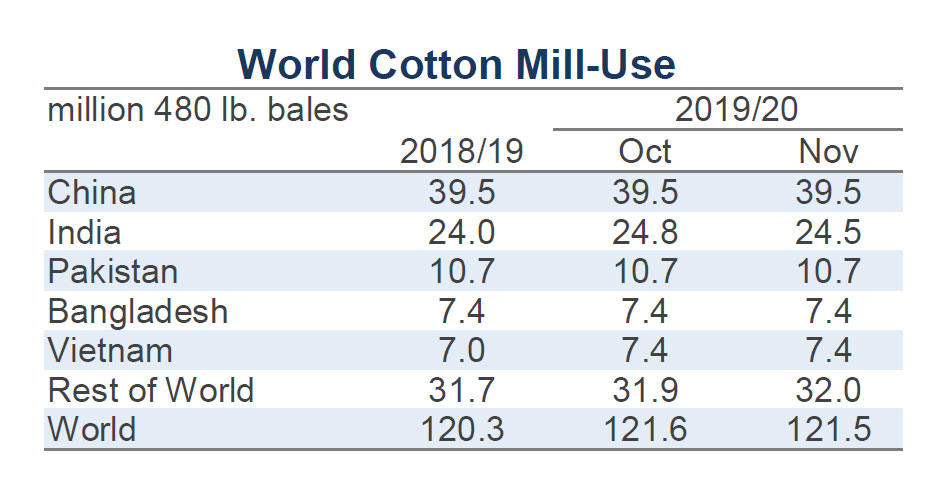 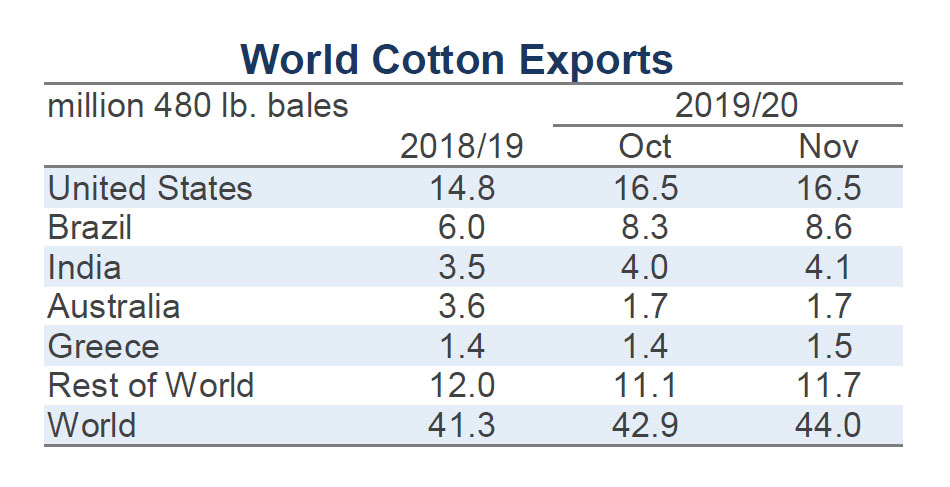 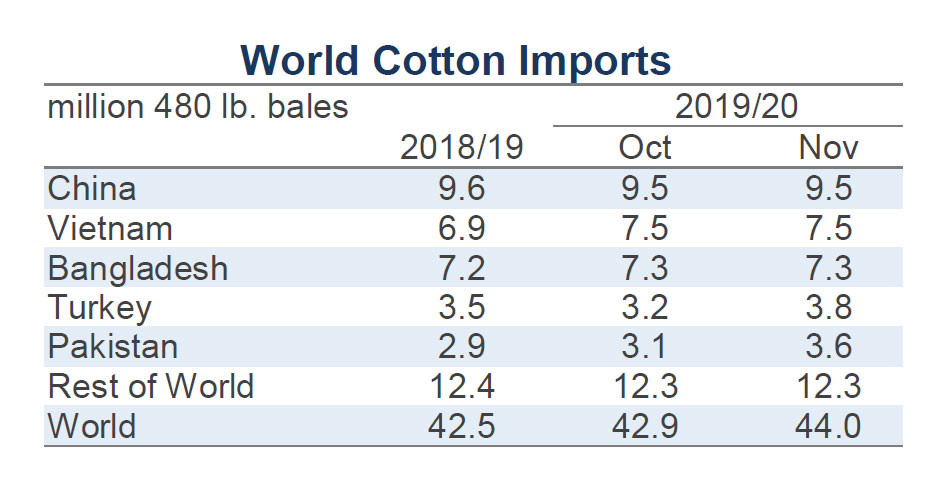 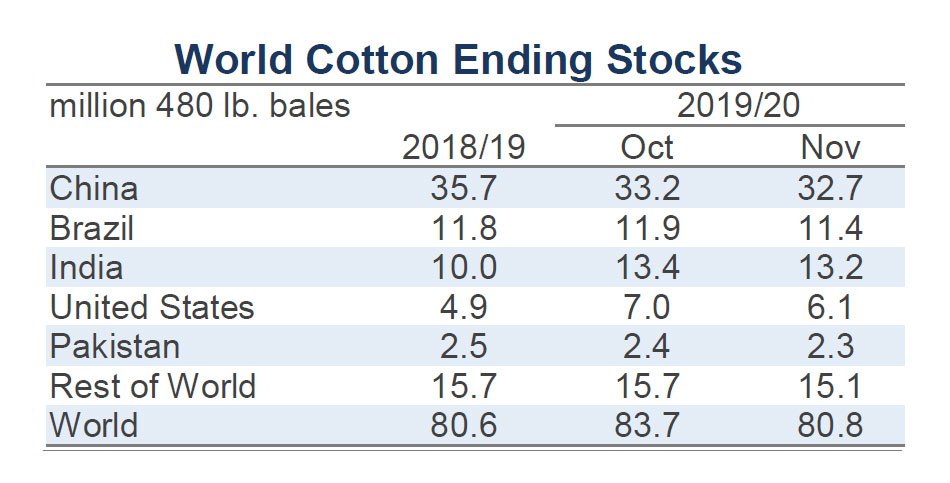 All international benchmark prices increased over the past month.

That decrease in stocks, along with the combination of a smaller harvest and greater consumption, led to a 2.7 million bale reduction to the forecast for 2020/21 ending stocks (to 101.1 million bales).  Even with the reduction, the figure for ending stocks predicts the second-highest level on record (only the 106.8 million bales from 2014/15 was higher).

NY futures have followed a relatively steady linear upward trend since posting COVID-driven lows in early April.  Gains recently pulled values above levels from one year ago (were near 62 cents/lb in early October 2019).

A factor contributing to recent upward movement in prices has been the series of weather-related challenges in the U.S. this year.  Hurricane Delta, which is currently making its way north through the Mid-South growing region, is the latest in a series of major tropical storms to hit the U.S. cotton belt.  States in the projected path have a high proportion of bolls open and exposed to wind and rain.  Beyond these storms, hot and dry conditions dominated West Texas this year.  West Texas is the most concentrated region for U.S. cotton, and drought is expected to lead to both abandonment and yield loss.

A factor depressing prices one year ago was the escalation in trade tensions between the U.S. and China.  Around that time (in September 2019), the U.S. implemented tariff increases on a wide range of Chinese-made consumer goods, including apparel and home textiles.  Recent U.S. sanctions against certain companies in Xinjiang and the possibility of a ban on products containing cotton produced in Xinjiang are an indication that tensions have not eased.

However, between the last major round of tariff implementation and the present, the Phase One agreement was signed.  Since the agreement went into effect on February 14, 2020, net new sales of U.S. cotton (for delivery in the current and upcoming crop years) were 3.6 480lb million bales.  Over the same period in 2019, when trade tensions were rising and no agreement was in place, Chinese purchases were less than one million bales.

Cotton-specific details associated with the Phase One agreement have not been made public, but targets for agriculture across commodities were released.  Those targets indicated that China would purchase $12.5 billion more of U.S. agricultural production in 2020 than in 2017.  In 2017, China purchased $24.1 billion in agriculture from the U.S.  This implied a target of $36.6 billion.  Through August, the value of Chinese imports of U.S. agricultural goods was less than half of the amount required to be on pace to meet that target.  It is possible is that China may accelerate its purchases to meet the goal.  With only a few months left in 2020, this appears unlikely.  Another possibility is that China will not meet import targets.  COVID-related concessions may be made, but the consequences of an unfulfilled agreement are not clear.  This is especially true with the upcoming U.S. election.

The U.S. recently opened an investigation into Vietnamese trade practices.  Cited motivations for the investigation are imports of illegal timber and currency manipulation.  Vietnam has been the largest export destination for U.S. cotton since 2015/16 .  It is the second-largest source of U.S. cotton-dominant apparel imports (17% share over the past 12 months, during the same period China had a 22% share).  U.S. retailers have suffered from supplemental tariffs on Chinese-made apparel and from COVID.  If actions are taken against Vietnam, it would be yet another blow to their profitability.  It is unknown what the course will be for the Vietnamese investigation.  It took seven months for the U.S. to complete its investigation into Chinese trade practices and another couple months beyond that before tariffs were announced.

Beyond trade tensions, COVID continues to cast a shadow over the market.  Rates for new daily cases continue to rise globally.  Sharp increases in Europe and several U.S. states and may lead to renewed restrictions on consumer activity.  Nonetheless, estimates for global mill-use have been increasing.  A recent survey of textile manufacturers conducted by the International Textile Manufacturers’ Federation (ITMF) found that 70% of respondents believe that their business will return to pre-COVID levels by the second quarter of 2021.

View the full report and charts 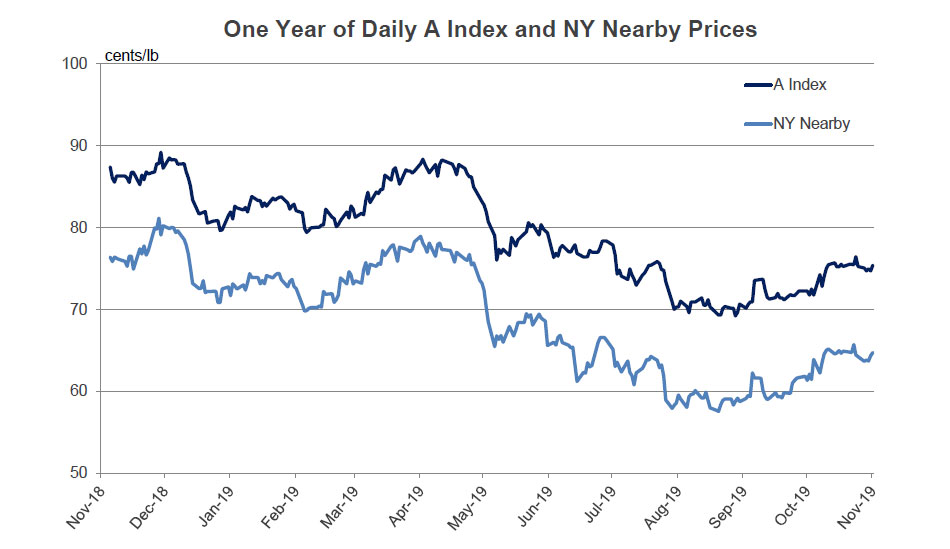 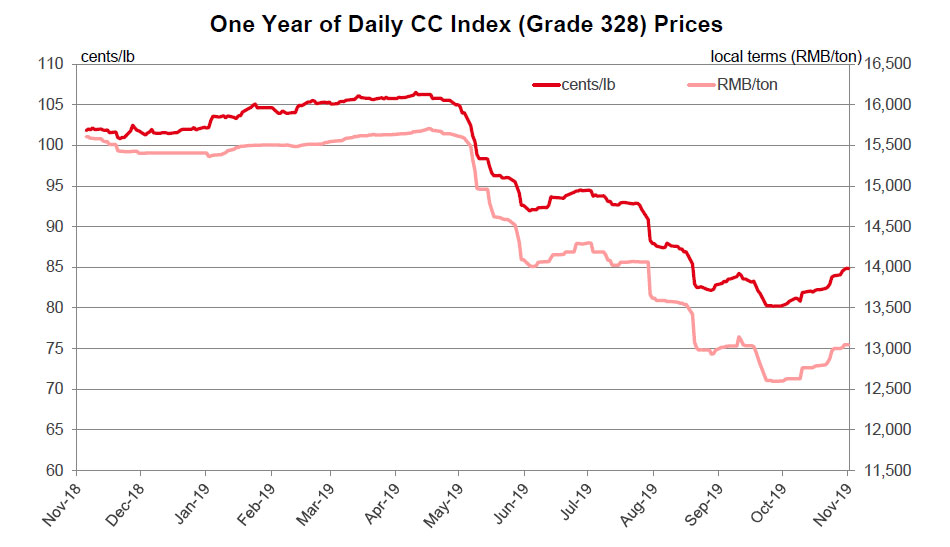 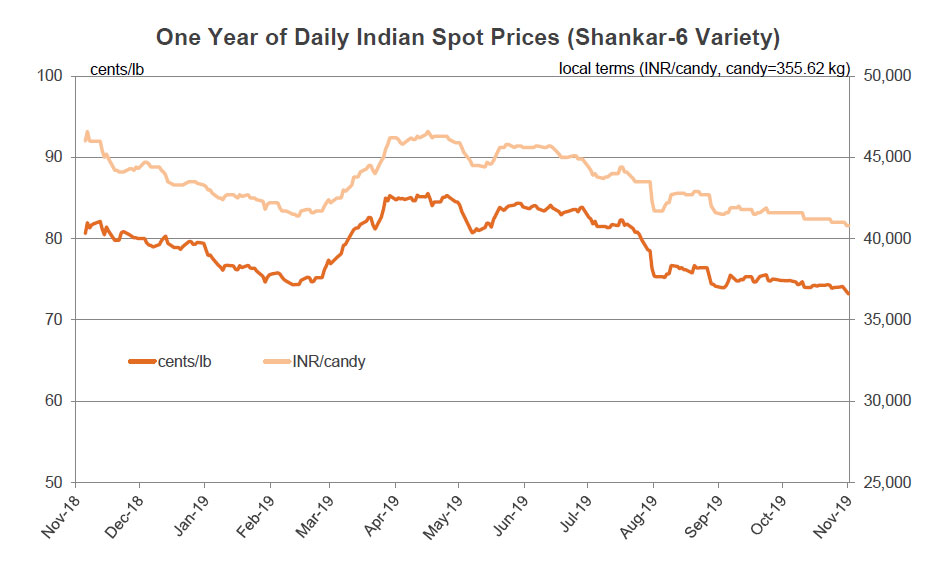 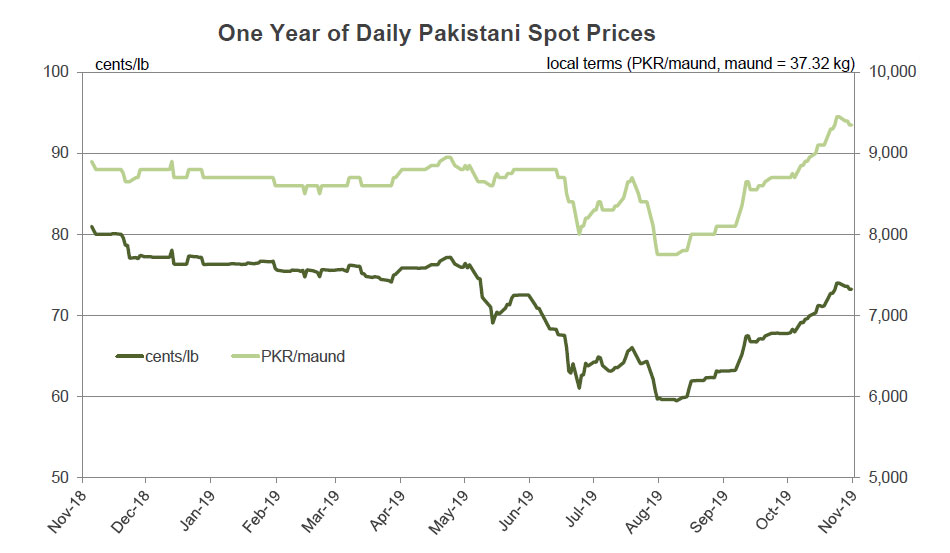 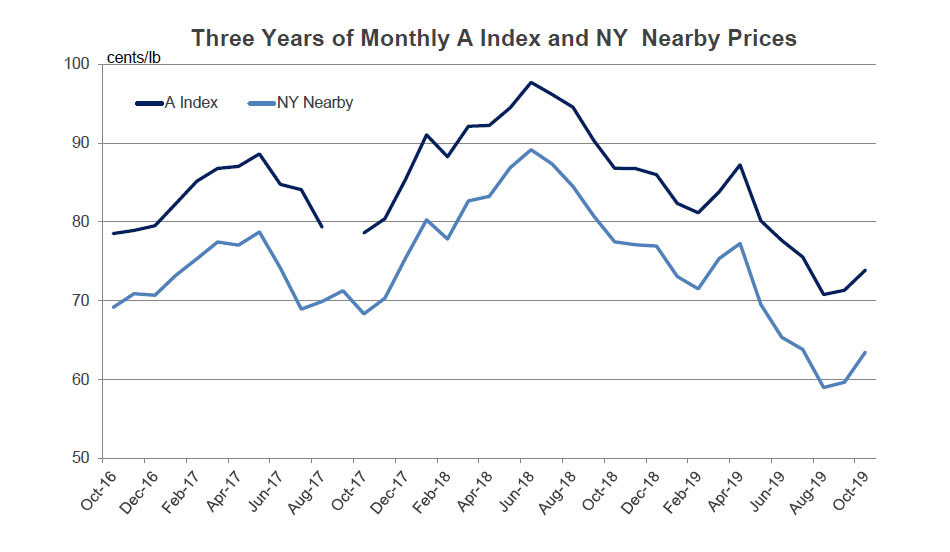 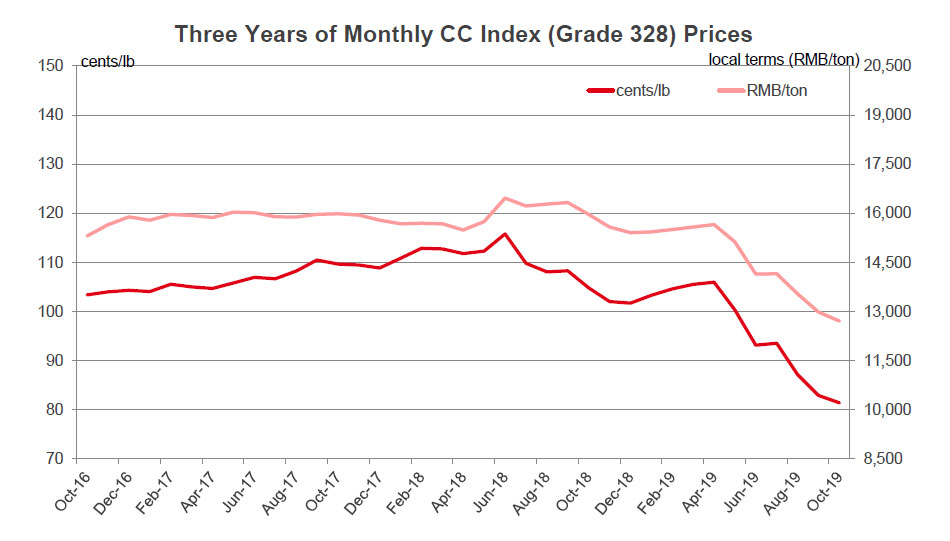 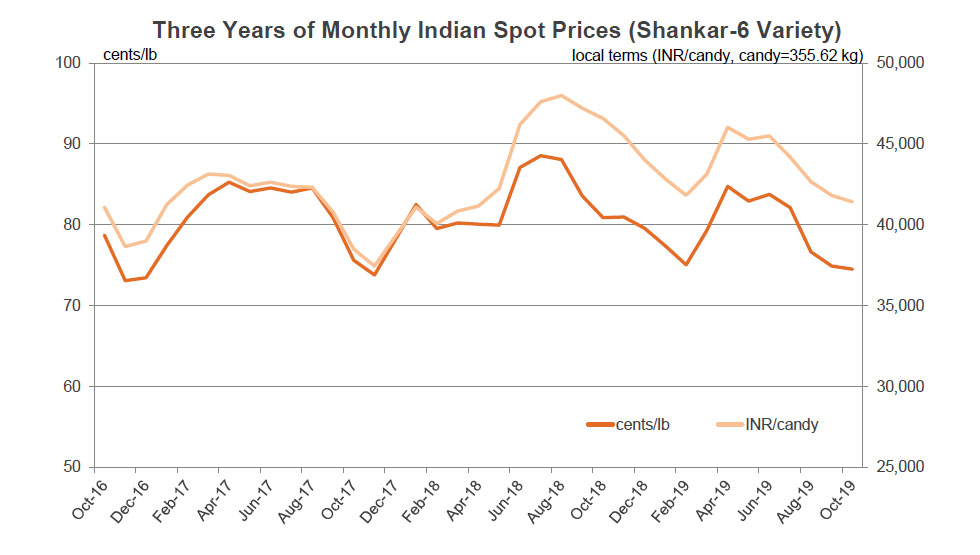 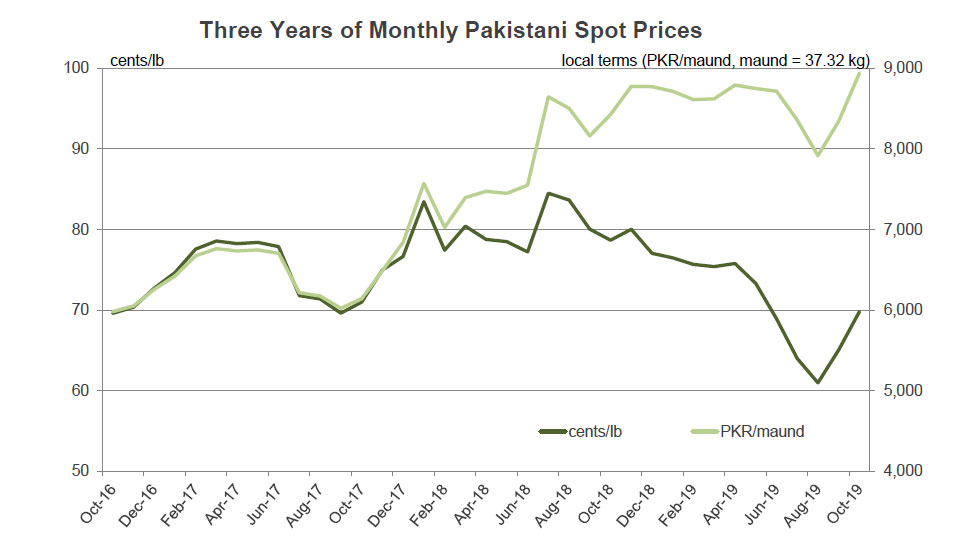 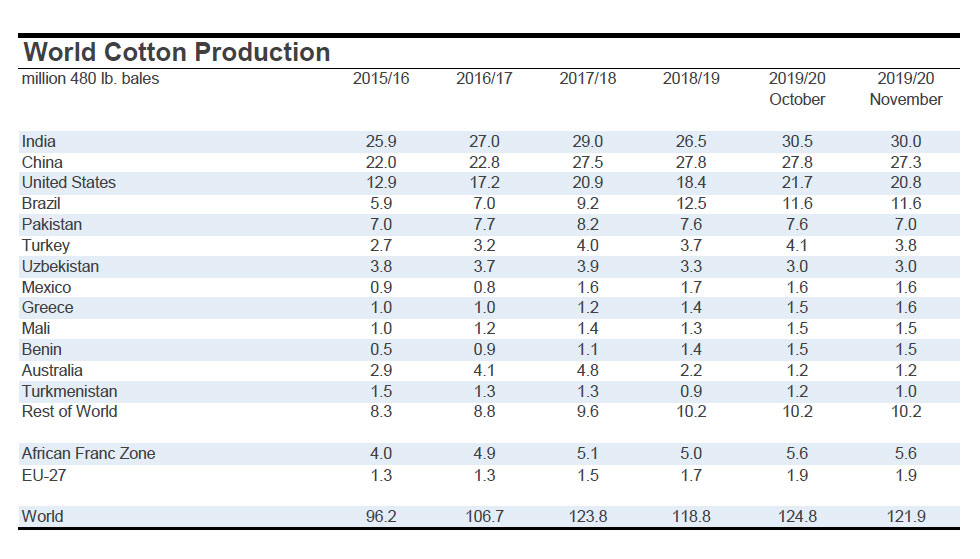 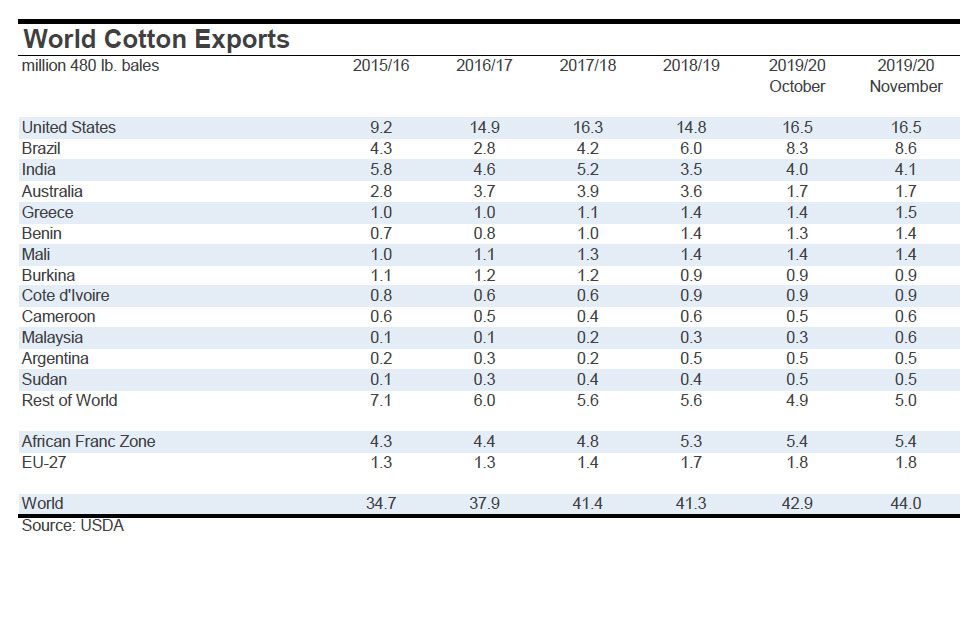 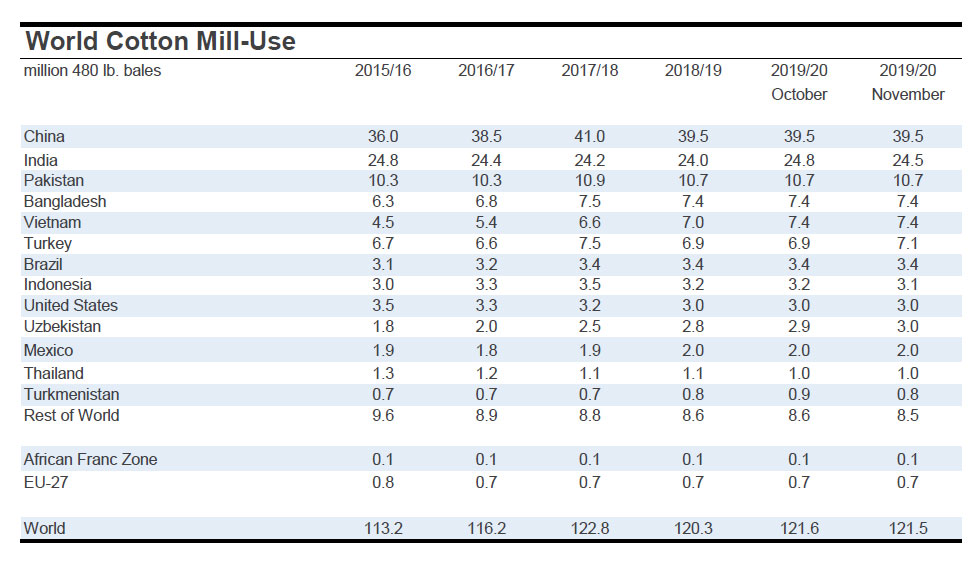 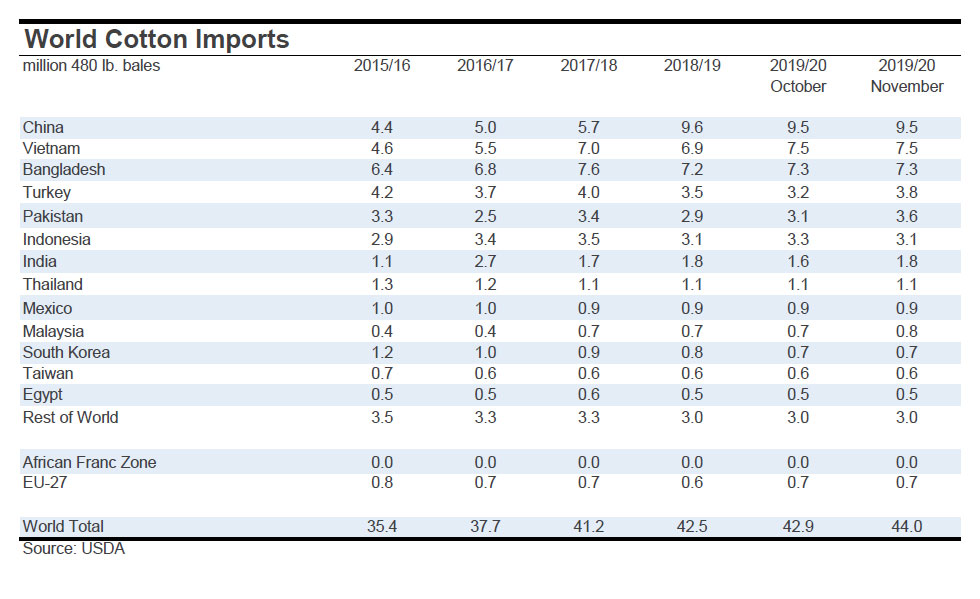 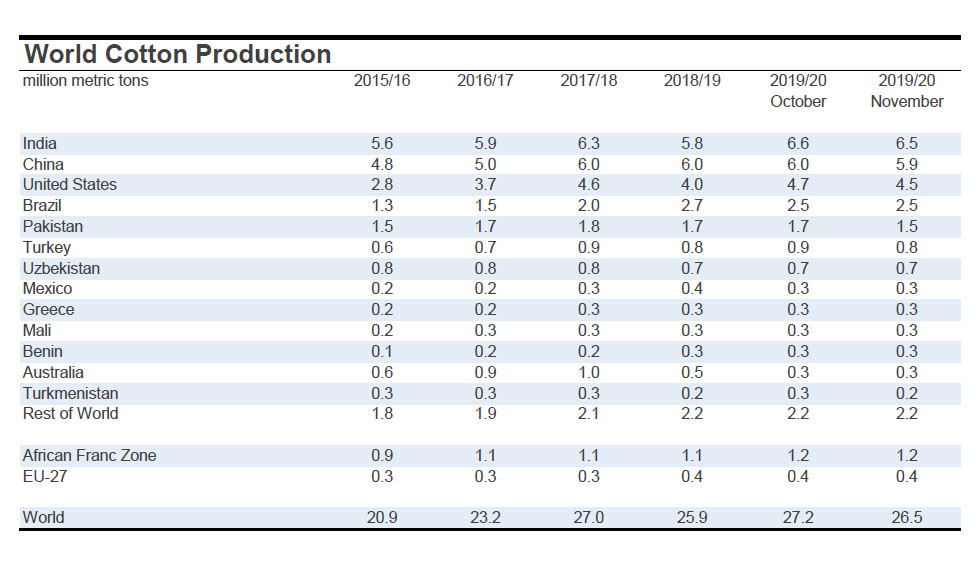 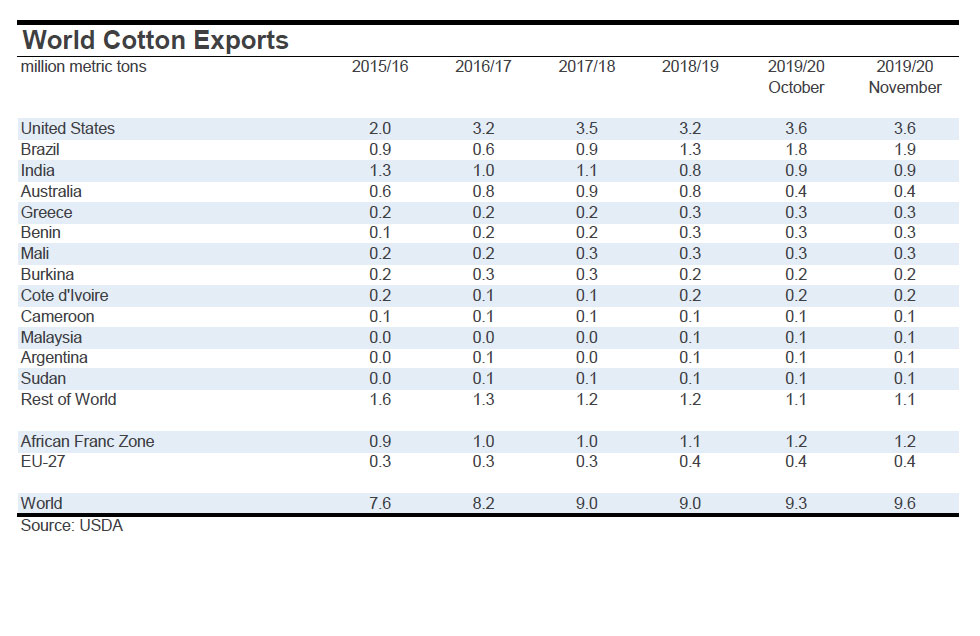 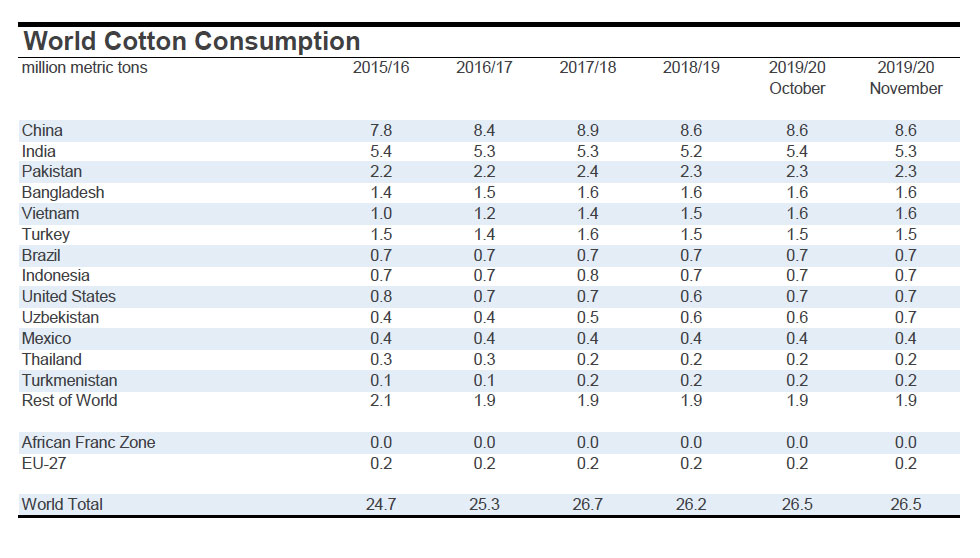 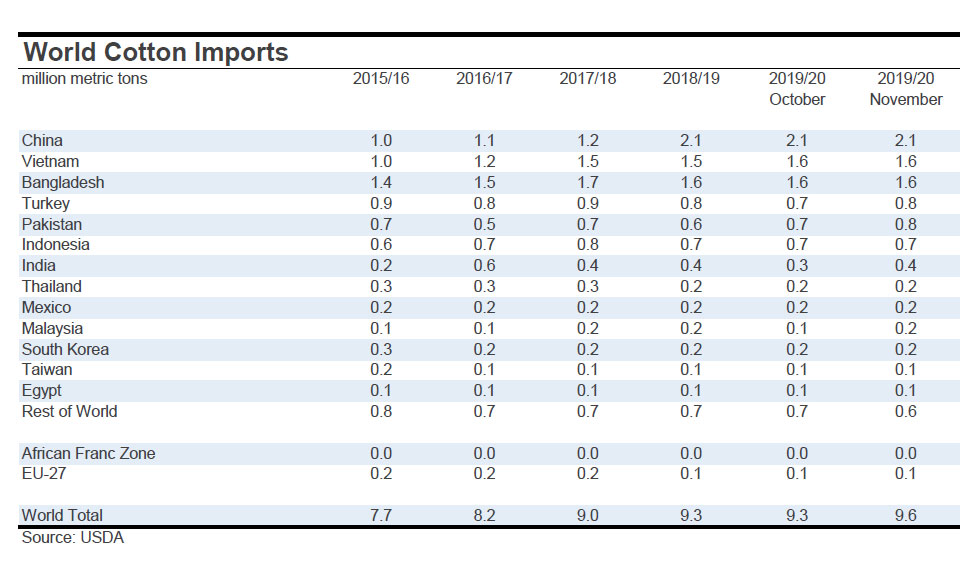