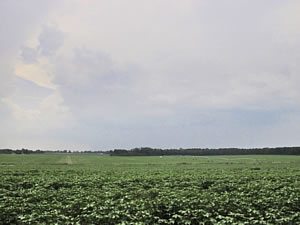 Figure 1.1 – While rainfall usually supplies what cotton needs in the south, there will be years when irrigation will be the reason there is a crop to harvest.

The majority of U.S. cotton (about 65%) is currently produced under non-irrigated conditions. In the South and the Southeast, non-irrigated cotton systems dominate, while in the arid West nearly all of the crop water requirements are met by irrigation water. With rising production costs and the devastating effect of drought on yield, adopting irrigation to supplement rainfall in the humid areas, and improving irrigation water management in the drier areas, is becoming increasingly essential to stay competitive.

Irrigation has economic benefits to the producer by increasing yield per unit land area, and benefits to society by providing a consistent and dependable source of food and fiber. Irrigation offers safeguards against poor crop performance and/or failure due to insufficient and/or untimely rainfall. Safeguarding against rainfall uncertainties is highly desirable in today’s competitive markets where substantial investment has been committed at cotton planting time. Irrigation also facilitates agro-chemical management through the use of fertigation and chemigation practices.

It is estimated that approximately 70% of the world’s fresh water consumption is for irrigation (all crops, not just cotton), and for good reasons. Irrigation can boost yield as well as stabilize yield and quality by ensuring adequate soil water during the entire growing season or at least during critical growth stages in areas where water resources are limited. In the sandy Coastal Plain soils in the Southeast, irrigation has been shown to nearly double the non-irrigated cotton yield from about 750 to near 1,200 to 1,500 lbs. of lint per acre during water limited years. These large differences in yield are mainly because irrigation supplements rainfall, ensuring adequate water in the root zone to meet crop water needs on a consistent basis. The lower non-irrigated yields are mostly due to insufficient soil water during the season, even though yearly rainfall in the humid parts of the Cotton Belt is about 45-55 inches, or almost twice as large as the seasonal cotton water use.

The problem is that the occurrence of rainfall is random; one never knows if the right amount will come at the right time in the growing season. Consequently, drought periods could occur at any crop growth stage with varying duration and severity. Because of this, non-irrigated yields can vary widely from year to year. The risks associated with yield instability can be partially removed by irrigation, which leads to a more predictable season-ending yield (and thus return) year after year. This is a significant advantage, allowing for financial planning on the part of the producer.

Generally speaking, soil water escapes the cotton field by a combined evaporation from the soil and transpiration from the cotton leaves. Soil evaporation and crop transpiration are usually lumped together as “evapotranspiration” or ET. The terms evapotranspiration, crop water use, or crop water requirements are basically the same and are used interchangeably. In the transpiration process, water from the soil is lost to the atmosphere through the many pores on the leaves called stomata (plural for stoma). Stoma is a tiny pore in the outer epidermis of a plant leaf that controls the passing of water vapor and other gases into and out of the plant. During daylight hours, plant leaves receive energy from the sun and need to open their stomata to take in carbon dioxide (CO2) to grow and metabolize (a process called photosynthesis). When stomata open to take in CO2, water in the leaves transpires, or simply evaporates and escapes the plant. Transpiration cools the plant leaves; allowing the photosynthetic apparatus to produce carbohydrates at optimum levels.

Like all crops, seasonal water requirements or ET for cotton vary by the climate it grows in. The dryer and hotter the climate is, the more water the plant must transpire to keep cool and produce biomass. While climate (i.e., the level of air temperature, humidity, cloudiness or radiation, and wind speed) determines the demand for water (called evaporative demand), soil water dictates how much water can be supplied to the plant roots to meet the evaporative demand. As soil water decreases, transpiration falls below evaporative demand because the drying soil is unable to transmit water to the roots fast enough to meet the demand at the leaf surface.

Under limiting soil water conditions, the reduction in transpiration is caused by a highly complex feedback mechanism in the plant that tells the stomata to close and thus limit further water loss from the leaves. As stomata close, plant temperature rises and the plant undergoes water stress. Stress may not be visible initially, but plant processes begin to slow down as plant temperature goes up. Soon, visible signs of stress become evident, including leaf darkening and loss of leaf turgor. With stomata at partial opening, the process of photosynthesis or biomass production slows due to lack of CO2 intake by the plant. Simply stated, water stress causes the plant to grow slower and smaller. The higher the severity and duration of the water stress, the higher the loss of biomass production and thus yield. Also, the sensitivity of the plant to water stress changes with growth stages, and is usually highest during rapid canopy development and effective flowering stages. Cotton is an indeterminate perennial shrub that is somewhat tolerant to drought and soil salinity. Because of its drought adaptations, cotton responds favorably to periods of water stress sufficient to slow vegetative growth; a physiological feature that can be benefited by timely irrigation management.

The Relationship Between Water and Yield

For the Cotton-Belt, cotton ET increases by about two-fold from the humid East to the arid West. For example, cotton in the desert Southwest requires as high as 40 inches of water per season for long season varieties, about 30 inches in Lubbock, Texas, while as low as 18 inches and mostly between 20 and 25 inches in the humid Southeast (for details, see Section 4: “Cotton Water Requirements”). In the Southeast, the probability of receiving 20 to 25 inches of rainfall evenly distributed during the four-month cotton growing season is quite low, meaning non-irrigated cotton yields rarely achieve their full potential due to inadequate soil water. For example, on average, cotton’s peak daily water use is about 0.25 to 0.3 inch, or about 2 inches per week, during summer near Columbia, South Carolina. The probability of receiving 2 inches of rainfall weekly during August in Columbia is only 30%, implying not only production uncertainty and risk, but also suggesting lost yield potential under non-irrigated farming. While water requirements are higher in the West, so are yields.

A useful relationship between yield produced per unit ET or crop water used is water use efficiency (WUE). Modern, high water use efficiency (WUE) cotton varieties tend to provide at least 60 pounds of lint and 90 pounds of seed for every inch of water used. On a global basis, a recent summary of the past 25 years of cotton data (that included some data from the Cotton Belt) lists average WUE for seed cotton (fiber plus the seed) as 147 pounds per acre-inch or, just considering the fiber, 52 pounds of fiber per acre-inch. On a smaller scale and based on a limited study in south Georgia, the addition of 4 to 6 inches of supplemental irrigation above the seasonal rainfall increased lint yield by 250 to 620 lbs., suggesting 60 to 100 lbs. of lint per inch of irrigation above rainfall. 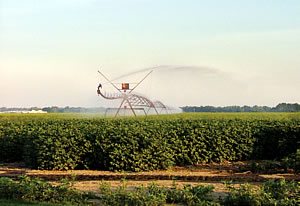 Generally, water use efficiency (WUE) is computed either as yield (lbs. per acre) per seasonal crop water use (or ET) or as yield per total applied water (seasonal irrigation plus rainfall). The former is more of a biological indicator (basically describes biomass production per transpiration) and there is limited control on the part of the irrigator to alter this efficiency. Since ET is soil evaporation plus crop transpiration, biological WUE can be increased by reducing soil evaporation and increasing crop transpiration. Conservation tillage (i.e., no-till) leaves substantial residue on the surface, which reduces soil evaporation (E) and consequently increases transpiration (T) and thus yield per unit of water input. The latter water use efficiency of yield per unit of applied water is largely influenced by the performance of the irrigation system and the degree of water losses beyond crop transpiration. Irrigators should strive to increase yield per total water applied by employing efficient irrigation water management practices that reduce losses due to deep leaching and runoff, and by improving irrigation system efficiency and application uniformity through system upgrade.

Irrigating cotton with the correct amount at the right time can boost yield and reduce input costs. This requires a firm understanding of the critical cotton growth stages and water use. The use of high WUE varieties also helps with securing greater crop per applied water. Increasing WUE and drought tolerance in cotton is highly valuable to U.S. and world agriculture by helping growers to maintain or increase crop production with less water. Currently, traditional crop breeding and advanced gene technology methods are being used by the seed industry to develop cotton varieties with higher WUE and drought tolerance.

Optimizing the Use of All Crop Inputs

Competition for limited water resources is one of the most critical issues being faced by irrigated agriculture in the United States. Even in the humid Southeast, water consumption in agriculture is quickly becoming a concern, caused by increased demand due to population growth, water quality degradation, and higher frequency and duration of drought. There is no new water and the existing water supply, limited by physical, ecological, and economic constraints, must be managed wisely and more efficiently via conservation, reuse, and increased water use efficiency to meet the increasing demand. This entails reducing over – and untimely-watering and improving system efficiency and application uniformity. Efficient and wise use of irrigation water is essential to remain competitive and maintain profitability and environmental sustainability.

Getting the “Most Crop Per Drop”

Irrigation delivery methods continue to be refined to make sure producers get the “most crop per drop.” Within the last few years, new technology has also become available that allows individual sections of an irrigated field to be turned on or off. This leads to more water savings. If there is a portion of the field that does not need irrigation (for example, a low spot where rainfall collects) the pivot is programmed to turn off the sprinklers over that area. In spite of all the advances, over – and untimely-irrigation is widespread. In many instances, over-irrigation is used as a management strategy to guard against risks associated with inadequate water management plans. But overirrigation is also a major contributor to excess leaching of water, nutrients and crop protection chemicals. This is not only costly to the farmer but could also lead to adverse environmental effects. Efficient irrigation starts with a sound irrigation water management, or scheduling. While only about 35% of the cotton acreage in the U.S. is irrigated, for those acres that are irrigated, we must practice wise use of water and ensure that in water-limited regions we get the “most crop per drop,” or simply increased “water productivity.” In areas with abundant rainfall, proper use of supplemental irrigation is needed to reduce waste, avoid under-watering, and ensure “most crop per unit of land,” or simply increased “land productivity.”