We have updated our Terms and Conditions and Privacy Policy with important information about our collection and use of your data and your data privacy options.
skip to main content
› Cotton Production › Cotton Production Resources › Cotton Harvest Systems › Seed Cotton Handling Storage › A Brief History of Cotton Modules

A Brief History of Cotton Modules

For many years, trailers were the primary method of moving harvested cotton from the field to the cotton gin. Until the mid-1940s, cotton was primarily hand harvested and there was a limited effect of trailer capacity on timeliness of harvesting.

Figure 1 A modern module builder with cab for operator comfort and hydraulic drive system. A tractor provides PTO power to drive the hydraulic pump and drawbar power to move the builder. (Photo courtesy of KBH, Inc.)

The need for an improved storing and transporting system led to the development in the early 1970s of the module builder. This was a system in which cotton was dumped from the harvester into the module builder and the cotton compacted into a trapezoidal shape. Initially, modules were built on pallets made of either wood or metal. Further studies found that the cotton modules could be formed and stored directly on the ground without significant loss of cotton quantity or quality, so long as the ground surface was well drained.

A method of hauling the modules from the field to the gin was also developed. Initial haulers used tilting beds with rollers and a winch that pulled the pallets onto the truck. Modules built without pallets allowed the use of systems similar to those for hay bales. This included a series of parallel chains built into the tilting bed. The chains were synchronized to the ground speed of the truck when loading and unloading the module. The module truck provided a method for transporting the modules at higher speeds and longer distances.

When cotton moduling systems were initially adopted, the gins were not adequately equipped to break up the modules. The suction system used to unload trailers was slow and ineffective when feeding compressed seed cotton from modules. Early systems utilized either stationary or moving heads that used several cylinders with lugs to remove the cotton from the compacted module, dropping the seed cotton onto belts or into pneumatic conveying systems.

Taken as a system, the module builder, transporter and feeder represented a revolutionary change in the way cotton was handled between the field and gin. The module system was adopted rapidly wherever cotton was mechanically harvested, because it provided significant operational efficiencies, both for harvesting and ginning operations.

Figure 2 The boll buggy is used to transport harvested cotton between the harvester operating in the field and the module builder located at the edge of the field. (Photo courtesy of KBH, Inc.)

The initial module system concept evolved with many changes and improvements. The module builder used in the United States has kept the standard 7.5-foot wide by 32-foot base dimensions. Module builder height can vary from 9 feet- 6 inches to 11 feet, with the more common height being 11 feet. The choice of heights depends on other equipment used in the harvesting system. Additional improvements have been in hydraulic systems, operator controls, expanded wire sides to allow air to escape during dumping, and cabs for operators. A modern module builder is illustrated in Figure 1.

The biggest change since the early development of the module builder has been larger capacity cotton harvesters. Harvester operating width gradually increased from 2-row to 4-row and then to 6-row and 8-row. The wider multi-row units cannot dump directly into module builders because of the header width. To accommodate the wider machines and keep the expensive harvesters working, a system of using carts, known as boll buggies, was developed to transport the harvested cotton from the field to the module builders that were typically located at the edge of the field.

The boll buggy (Figure 2) pulled by a tractor follows the harvester through the field until the basket on the harvester is full. The boll buggy pulls along the side of the harvester, receives cotton dumped from the harvester basket, and transports the load to the module builder. This separation of the harvest and transport functions allows the more expensive harvester to spend more time harvesting. Some harvesters and boll buggies are equipped with live chain drags on the side of the baskets so that, when tilted up for dumping, the cotton can be dumped in a more controlled manner. As more of the cotton crop was stored in modules, the need to maintain the quality of the seed cotton became apparent. Seed cotton modules are protected by placing a water-resistant cover over the top surface of the module. Early covers were made of canvas, but were gradually replaced by coated plastic materials because of lighter weight and lower cost. 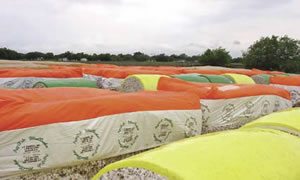 Figure 3 Conventional, half-length and round modules stored in a gin yard. Photo was taken after rainfall, and some modules have water collected on the cover surface.

Engineering efforts to develop a cotton picker that would also form modules started in the late 1970s and early ’80s, but it was not until 2007-09 that these systems became commercially available. Both U.S. cotton picker manufacturers sell harvesters that will compact the harvested cotton into a module. The Case IH machine makes a 16-foot-long unit (a “half module”) that requires covering after unloading. The John Deere cotton picker forms seed cotton into a round module shape of about one quarter of the weight of a convention module, and surrounds that module with a plastic film that forms the cover.

These machines represent further efforts to enhance the efficiency of the cotton harvest operation. By performing both harvest and module forming operations, these machines can eliminate the need for boll buggies, module builders, tractors and labor. Accomplishing these efficiencies required compromises, however. These machines form smaller modules and have a significantly higher initial cost than conventional cotton pickers.

While these new machines produce different module shapes and sizes compared to conventional modules, the need to maintain the seed cotton quality in the package remains. Figure 3 shows conventional modules, half modules and round modules together in a gin yard. The image was taken following a rainstorm, and water can be seen collected on the top of some modules.