It is no longer enough for textile innovations to focus solely on interesting fabric features. The industry is evolving with an eye toward high-performance fabrics produced with sustainable, low-impact methods.

To that end, Cotton Incorporated has demonstrated its commitment to eco-conscious production by working with industry leaders to bring new products and processes to their businesses.

For example, the company collaborated with DuPont on a product that makes the preparation and dyeing processes more eco-friendly. DuPont’s PrimaGreen® products offer an effective alternative to the chemicals typically used. The PrimaGreen® product calls for the enzymes for scouring, bleaching and dyeing to be combined, which consolidates some steps in the process without sacrificing quality. The bioenzyme combination allows the same water bath to be used for multiple steps in the dyeing process. The products perform at a lower temperature, allowing processors to use less energy for heat. On average, water usage was reduced by 70%, steam by 33% and energy by 27%. Such efficiency reduces total costs of these inputs by an average of 66%. Since the PrimaGreen® products consolidate steps, they save overall processing time and speed products to market.

Just as Cotton Incorporated is dedicated to increasing sustainability for growers, it is also committed to supporting businesses that transform cotton into consumer products in their efforts to reduce their environmental impacts.

To that end, the company has created a guide titled World of Ideas, which focuses on identifying and promoting strategies to reduce water, energy and chemical (WEC) usage in textile processing. To create the how-to booklet, Cotton Incorporated surveyed 40 cotton textile processing companies in areas of China, India, Turkey, Southeast Asia and the Americas. The companies shared what became 26 practical and effective changes made to their processes, dyes and chemicals, equipment, control systems and management and wastewater treatment that significantly reduce WEC requirements.

The guide details how the WEC environmental footprint can be cut in half by modern textile plants in the world’s major textile regions, further laying the groundwork for future sustainable improvements.

Since water is such a precious resource for the 17 U.S. states that grow cotton, growers are now relying on precision agriculture techniques, which

deliver water only when and where it is needed.

For some time, water conservation has been top of mind for Cotton Incorporated, inspiring even further innovation and creativity in a desire to find solutions. In factories and, labs, the search is ongoing to create cotton textiles while using less water.

Cotton is a remarkably drought-tolerant plant, and two-thirds of the U.S. crop is grown with natural rainwater. Despite its hardiness, cotton requires water, whether in the form of rain or irrigation, at key stages of the growth cycle. If, for instance, there is inadequate rainfall after sowing and fertilizing, the crop may be compromised, and valuable land, time and inputs could be lost.

However, experts say the century of “the golden age of water” – during which water was unlimited, safe and free – is ending for the developed world. Drying lake beds and riverbeds around the globe are proof that water supplies are changing.

To identify the most effective way to grow and process cotton with the least amount of water, Cotton Incorporated has been working with cotton producers and scientists. This work will help growers save both money and water and will prepare them for the possibility of increased regulations on water use.

In the field, improvements in agriculture have produced some of the biggest reductions in water usage.

Since water is such a precious resource for the 17 U.S. states that grow cotton, growers are now relying on precision agriculture techniques, which deliver water only when and where it is needed. This technology is more efficient than improperly applied flood irrigation or using low-efficiency sprinkler systems that may waste water because of wind drift or evaporation.

Researchers have discovered that plants do best and water is used most efficiently when it is delivered close to the plants, very low to the ground and directly into the soil. One such method calls for drop lines to be hung from traditional sprinkler systems so growers can “lay” the water down between rows.

Subsurface drip irrigation is another growing trend. Although the tubes, which are set between six and 18 inches below the surface of the entire field, are expensive to install, they ensure water is delivered right to the plant roots. A more recent innovation is toward shallow subsurface drip systems. Buried in just two-to-four inches of soil, these systems reduce damage from insects and rodents.

Other irrigation approaches are even more innovative. Growers can use computer models that predict water use based on the growth state of the plant and weather data, as well as thermal infrared thermometers that measure leaf temperature, which rises as the plant’s need for water increases.

In the lab, scientists are striving to use advances in biotechnology to increase cotton’s drought tolerance. Such research will prove valuable not only to cotton producers but also to those growing other crops around the world. 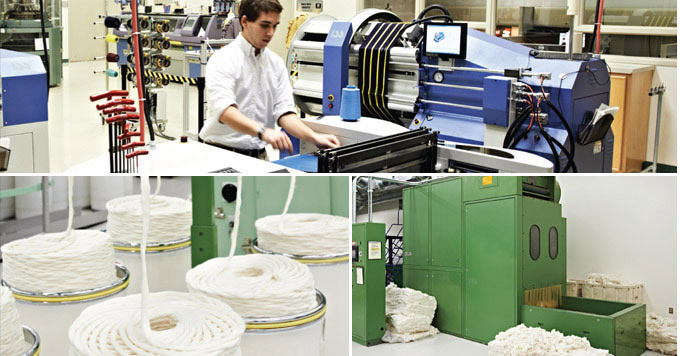 has helped mills and manufacturers optimize efficiencies Within their operations.

Conservation at the Manufacturing Level

In another initiative in Hong Kong, Cotton Incorporated collaborated with a denim manufacturer to fund the installation of vibrating membrane technology for recycling dye and water from dyeing. The process removes indigo from the water after the denim fabric has been dyed. The indigo dyestuff and water are separated from the dye house waste stream so both can be reused multiple times in the company’s denim processing. The most recent data show 70% of the water, or about 20,000 gallons a day, and 100% of the indigo can be reutilized.

In addition to investigating methods for reusing indigo, the Cotton Incorporated Technical Chemistry Research department, also part of the PDI division, is exploring other sustainability measures, such as sulfur dye alternatives to indigo.