Fusarium wilt of cotton, caused by the fungus, Fusarium oxysporum f. sp. vasinfectum Race 4 (FOV4), was confirmed in numerous fields in El Paso and Hudspeth counties in Texas in 2017. Undoubtedly, it was present in those fields for several years, but how the disease entered the area remains unknown. FOV4 was first identified in the United States in a single county of the San Joaquin Valley (SJV) of California in 2003 and has since become widespread across the SJV.

FOV4 Threatens Cotton Production
Several races of FOV cause Fusarium wilt. FOV4 differs from other FOVs found in the U.S. because it is highly virulent on susceptible Pima and Upland varieties commonly grown in the Western U.S. FOV4 infects cotton without requiring the root knot nematode (Meloidogyne incognita). In California, the disease proliferates across all soil textures in cotton production areas, and in
soils with pH values from neutral to alkaline. Once FOV4 is introduced into a field, it becomes a permanent resident. In California, crop rotation, summer fallow, and summer flooding have not eliminated the pathogen. Weed-free summer fallow and long duration summer flooding have, however, reduced the adverse effects of FOV4 on a subsequent cotton crop. The fungus can also survive as a saprophyte on the roots of plants other than cotton without evidence of disease. Seed-applied and infurrow fungicides that have been tested to date have not provided acceptable levels of disease control in broadly infested cotton fields. While there has been significant success in developing moderate to high levels of tolerance in Pima cultivars, evaluations of Upland lines are not as advanced as are those of Pima.

Infestation of Fields
FOV4 is introduced as spores into fields in four primary ways: 1. infected seed; 2. soil transported from infested fields on equipment, vehicles, and clothing and shoes of personnel who have been in infested fields; 3. in plant debris carried from an infested field by equipment; and 4. in irrigation or storm waters. It can take several years after FOV4 has been introduced to notice the effects of the disease on susceptible cotton cultivars. Early observations are typically bare spots that occur randomly, indicating areas where young cotton plants were killed (Fig. 1A). When FOV4 is first observed, it may be mistaken for seedling damping-off caused by Pythium or effects of other early season pathogens, such as Rhizoctonia solani (Figs. 1B and 1C). Over a period of several years, the bare spots of dead or stunted plants will increase in size, and may be spread and enlarged via movement of soil and plant debris by tillage, furrow irrigation, or storm water flows. 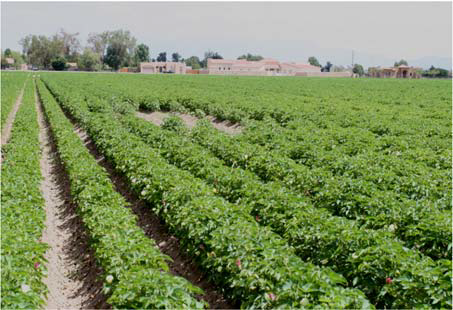 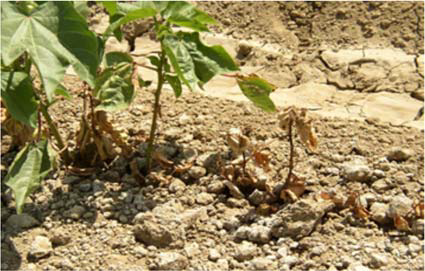 Symptoms of Susceptible Pima and Upland Cotton Cultivars
In California, the susceptible Pima cotton cultivars show severe disease symptoms and stand losses in early growth stages (1 to 6 leaf cotton). Many Upland varieties are susceptible to FOV4, but survival of small plants is typically better and early symptoms are less severe than those with susceptible Pima cultivars. However, both types of cotton can be infected when exposed to moderate to high soil inoculum levels, and FOV4 will reproduce in and around tissues of infected plants.

Symptoms differ between Pima (Fig. 2A) and Upland cotton (Figs. 2B and 2C). Severely impacted Pima cultivars tend to show leaf discoloration and necrotic areas as early as the 1-2 leaf stage, and may die at early stages (less than 6 leaves). Infected, susceptible Pima cultivars that survive may be severely stunted and show foliar symptoms; but damaged leaves often drop off during early development and may not be reliable indicators of infection. 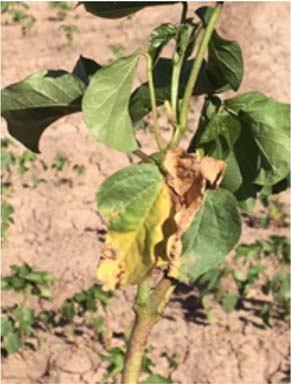 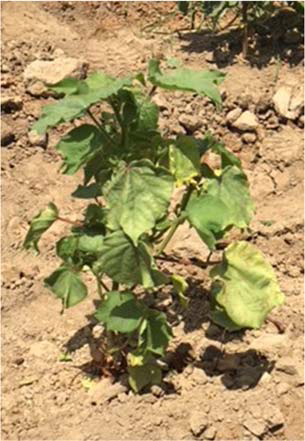 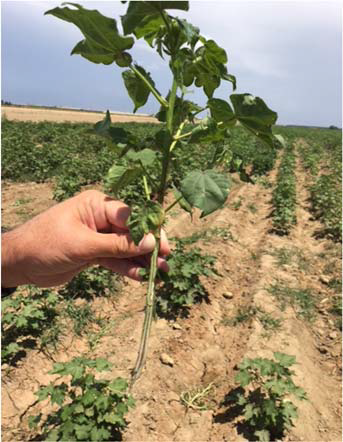 Many infected Upland cultivars show fewer leaf symptoms and much less stand loss during early stages of the disease than do susceptible Pima cultivars. Symptoms on susceptible Pima varieties are more obvious than they are on Uplands as the disease progresses through the growing season. In contrast, for many Upland varieties, there may be few or no foliar symptoms for up to 10 to 12 weeks after planting. However, these Upland cultivars can show extensive root vascular staining (Figs. 3A, 3B, 3C), which indicates a plant is infected and inoculum is being produced. 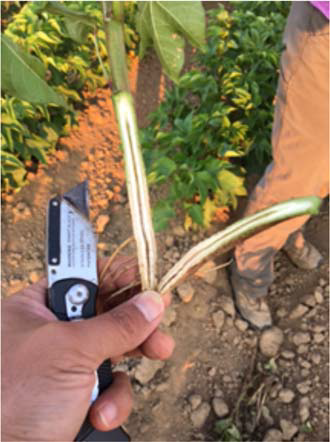 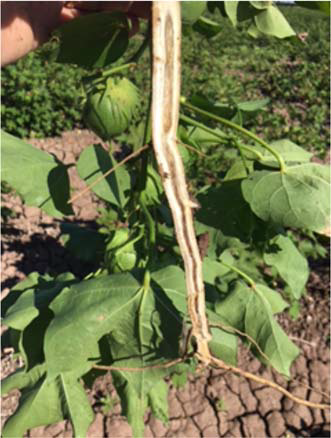 Although all the races of FOV can cause wilt symptoms, vascular damage from FOV4 is distinctive in most cultivars. FOV race 1 (FOV1) typically shows vascular staining that in later stages extends from the roots into stem tissues. In comparison, FOV4 enters the tap and lateral roots and produces vascular staining that often is restricted mostly to the tap and lateral roots. Vascular staining from FOV4 is dark and continuous, rather than streaked, and can be found in the core (central portion or pith) of infected cotton tap roots and lateral roots (Fig. 4). Such vascular staining of infected plants can be seen as early as the 1-2 leaf stage, or can appear later in plant development. Typically, the infection starts during early root development. With FOV4, staining is generally limited to the roots and not always evident in above-ground stem tissue. As the fungus continues to grow, more tissues decay. Eventually, in seriously affected plants, damage is seen as stunting, wilting, and death; while other infected plants may only be stunted and still survive the growing season.

It is essential to check the roots for vascular staining (Fig. 4).

Figure 4. An example of black streaking in the center of the root. Photo credit: Tom Isakeit.

Scouting for FOV4
Look for symptoms between the seedling and first flower stages. Weak areas with stand losses become more difficult to see when scouting in mid-season. Symptoms might be obscured later in the season, particularly if Verticillium Wilt or other races of Fusarium wilt are present. In cases of unexplained stand loss, collect several intact plants, put them in a paper bag, place them in a cooler or air-conditioned space, and bring them to your county extension office. At the office, they will be photographed and the photos electronically transmitted to the extension plant pathologist who will evaluate them, offer a diagnosis, or recommend that the samples be sent (preferably overnight) to a plant disease diagnostic laboratory.

How the Fungus Spreads

FOV4 can survive in soil, in plant debris, and in infected seed beneath the seed coat, even after acid delinted and treated with fungicide seed treatments. The fungus produces multiple types of spores and some types can survive in soil for many years. Spread within a field occurs when infested soil is moved by implements, vehicles or personnel, or when water carries infested soil or plant debris in irrigation or storm water to other fields. Local spread by soil movement can be reduced with practices of segregating or thoroughly cleaning equipment by power washing with detergents. 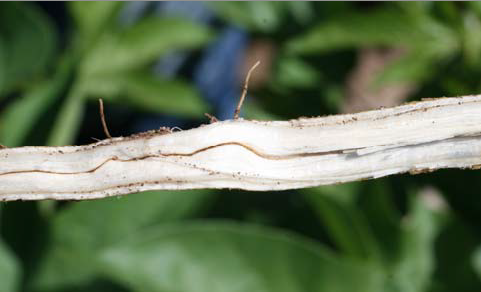 What Farmers Can Do to Prevent or Restrict Infestation