What Is at Risk When Seed Cotton Is Stored

The negative impact of weathering on seed cotton is well recognized. Studies have shown changes in color when seed cotton moisture is increased. Curley, et al. (1987) found that most of the coloring effect was due to yellowing. The yellowing was primarily affected by moisture content, days stored, average air temperature during storage and initial temperature of the cotton module. 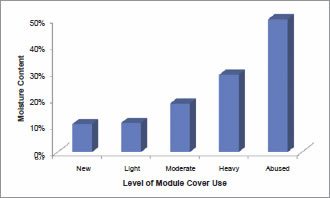 In practice, module covers are sometimes considered usable as long as they don’t have large rips or tears in the surface. However, breakdown of the water-resistant coating can seriously degrade protection of the seed cotton. Used module covers were obtained from gin inventories and tested under laboratory conditions at Texas A&M University. The covers were evaluated on a light table and categorized based on the condition and number of visible pinholes. Samples were exposed to simulated rainfall in a standardized test, and the amount of water penetrating the cover samples was measured. The water penetration increased from a near zero level with new covers to an excessive amount for those covers rated as abused. 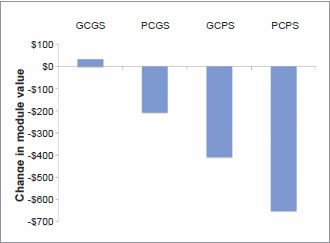 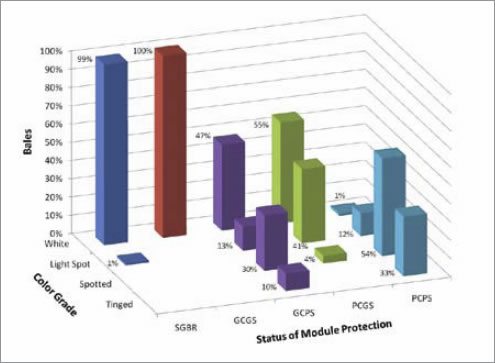 The impact of poorly protected seed cotton modules can be observed in the gin when modules are exposed to significant rainfall. In the 2004 harvest season on the Texas High Plains, a period of good harvest weather was followed by several days of rain with no wind. Large numbers of modules were formed prior to the weather event, and were exposed to the weather while stored in the fields. This situation allowed the comparison of lint grades and ginning performance for modules formed and ginned before the weather event to those formed before the weather but ginned afterward (Simpson and Searcy, 2005).

Prior to ginning, observations were made by gin personnel to evaluate individual modules for shape (good or poor) and the ages of the cover used (3 years or less = “good,” more than 3 years = “poor”). The three-year age was a rough indicator of the cover’s ability to resist moisture penetration. A module shape was judged as good if the module was full sized and had a flat- to crowned-top surface. With these assessments of the module shape and cover quality, the impact of weathering for various conditions was evaluated. With a total of 137 modules and 1967 bales observed, the study provided a “real world” assessment of the economic impact of module protection practices.

The study found that both growers and the ginner experienced significant economic losses due to poor seed cotton protection. Figure 7 shows how the average loan value of the modules in each protection classification was changed compared to the modules of the same cotton variety ginned prior to the rainfall event. The changes in lint value were due to reduced color grades.

Figure 8 shows the change in the yellowing portion of the color grade. The amount of yellowing of cotton increases from white (no or minimum yellowing) to light spot to spotted and to tinged (greater yellowing). When stripped and ginned before the rainstorm (SGBR) nearly all bales were graded as white. Bales from modules ginned after the storm, but with a good cover and a good shape (GCGS), retained the same high grade.

In various conditions of poor cover (PC) or poor shape (PS), the color degraded to spotted or tinged. Modules with both poor shape and a poor cover (PCPS) caused 99% of the grades to be reduced due to increased yellowness. In well-formed modules with good quality covers, there was no change in lint grade and value between those ginned before and after the weather event. When comparing the total module value to those with no rain exposure, building a well-formed module prevented about $200 loss, and using a high-quality cover prevented a loss of about $400. These losses are completely avoidable with adequate protection of the seed cotton.

In addition to the loss of value associated with reduced lint color grades, the growers also lost potential profit from a reduced gin turnout due to poor module covers. Table 1 shows the impact for the producer and the ginner of the different storage conditions. The well-formed modules with good-quality covers had no significant difference in turnout from the modules ginned before the storm. Poor shape and poor cover quality reduced the gin turnout up to 8 percent compared to the best condition. In addition, the wet cotton from the poorly protected modules also dramatically affected the productivity of the gin, causing an increase in ginning costs. Lost profit was not confined to the grower. Ginning high-moisture cotton reduced gin productivity and increased energy required for drying. Both growers and ginners have an interest in proper protection of seed cotton, and good practices can ensure highest profit and quality.