We have updated our Terms and Conditions and Privacy Policy with important information about our collection and use of your data and your data privacy options.
skip to main content
› Cotton Production › Cotton Production Resources › Cotton Harvest Systems › Seed Cotton Handling Storage › John Deere Round Modules 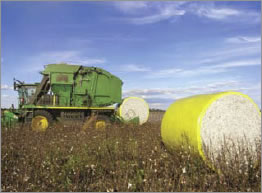 Figure 16 A John Deere 7760 cotton picker carrying a finished round module while harvest continues and the next module is being formed.

The John Deere 7760 forms round modules, using a mechanism similar to that of a round hay baler. The operation of the module forming mechanism is highly automated, requiring minimal operator interaction. The round modules are covered with an engineered polyethylene film that both protects the seed cotton and provides compressive force to maintain the module density. The module-forming control system handles the wrapping of the modules; and, when wrapping is completed, the module is ejected onto the carrier at the rear of the machine, as shown in Figure 16. The primary action of the operator regarding the modules is to decide when to drop the module being carried. Typically, the finished module is carried until it can be dropped on a turn-row. If the yield is very high, or the row lengths are long, it may be necessary to drop the modules in the middle of the field. This action has no impact on the operation of the picker, but stalks may puncture or tear the plastic wrap. 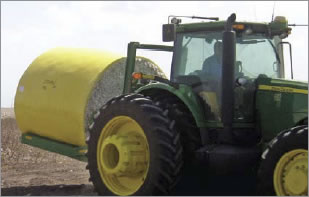 Figure 17 Carrying a round module with a three-point hitch attachment. The module is being staged for transport to the gin. 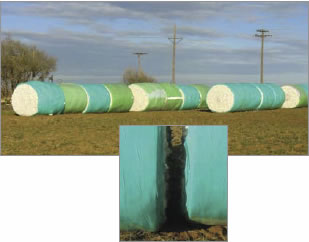 Figure 18 Staging of round modules for transport in conventional module trucks should be done in sets of four. A gap of four to eight inches should be placed between round modules to prevent damage of the wrap when loading (inset). (Photos by Alan Brashears.)

The round modules can be transported to the gin in conventional module trucks or on semi-trailers. The modules must be picked up where they were dropped in the field, and staged together for pickup, four for a module truck and six for a semi-trailer. The staging can be done using several different implements. The most common system is to use a set of forks with hydraulically controlled spacing mounted on the three-point hitch of a tractor (Figure 17). Other devices include a mast-type mounted implement that holds the module with the axis parallel to the tractor rear axle or a set of forks on a front-end loader. Because the round modules can weigh over 6,000 lbs., a large tractor is required for staging. The following practices are recommended when unloading and preparing modules for transport:

The plastic wrap typically performs well in preventing moisture from entering the seed cotton. The open ends of the modules will shed rainwater, provided the ends are not touching. Modules too close together will hold water between the ends, resulting in wet cotton with the usual potential for reduced-quality grades. When intact, the wrap will shed water on the circumference of the module.

Punctures and tears in the wrap can occur and will allow degradation of the seed cotton if not repaired. Tears can be covered with a water-resistant tape, such as lint bale repair tape. A common problem is that the adhesive at the end of the wrap gives way after weathering, resulting in loose ends. John Deere recommends reattaching the loose end with 3M 90 spray adhesive or lint bale repair tape. Wrap damage should be repaired before transport, as the loading/unloading actions can make damage more serious. The inside walls of the module truck must be free of burrs or edges that could catch and tear the wrap during loading.