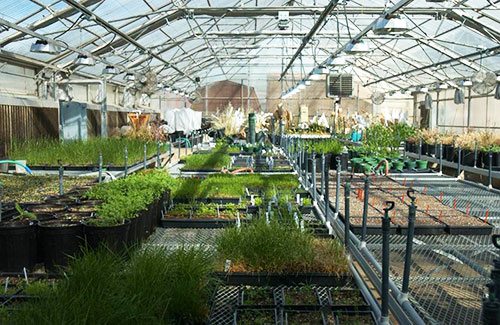 The underlying assumptions of the glyphosate-resistant Palmer amaranth research program in Colorado are that glyphosate metabolism is not occurring and that absorption, uptake, and translocation do not differ among resistant and susceptible plants. (n.b. Research information available at this time {7/12/08} suggests that these assumptions are true for the Georgia populations that are the subject of the Univ. of Colorado work. However, translocation is a probable mode of action for the TN population. See Steckel et al. cited in the attached RPMN 17(2):8-9. The focus of the program is target site mutation.

The hypothesis is that glyphosate resistance in the Macon county Georgia population is due to a dominant mutation or a change in gene copy number, and there is a pollen-mediated transfer of resistance. Colorado researchers hypothesize that there is a single amino acid change in EPSPS in the resistant plants. The enzyme enolpyruvate skimatephosphate synthase (EPSPS) in plants has eight exons (coding regions) and seven introns (non-coding regions). Mutations at Proline 106 (using the petunia numbering system) cause resistance in several species. In glyphosate-resistant Palmer amaranth from Georgia, a change from arginine to lysine occurs at position 316, a position that is flanked by highly conserved areas. In several other plant species, researchers also observe an arginine to lysine mutation at site 316. This site is far from the target site, but may affect folding of the protein. However, some sequences from susceptible plant species have also have lysine in this position, suggesting that the lysine residue may not confer resistance.

In other Colorado research, F1 data indicate that the gene for resistance is partially dominant. The question of whether the gene can be transferred to other pigweed species was discussed. The point was made that smooth (A. hybridus), Powell (A. Powellii), and spiny (A. spinosus) do hybridize and that apomixis does occur in Palmer amaranth.

In summary, Westra offered the Colorado research as good, preliminary research for collaborative projects, inquired if the results of duplicating efforts might be combined for publication, and stressed that this is a great area of research for training future weed scientists.