Open interest in ICE cotton futures had a rising pattern of open interest, along with rising price settlements. This suggests the addition of new long positions.  If true, this must have happened later in the week because the regular Tuesday snapshot (through April 6) of speculative positioning in ICE cotton futures showed hedge fund selling in the form of 870 liquidated long positions plus 2,294 new outright shorts. The same CFTC report also showed over 1,475 fewer index fund longs, week over week.

In addition to apparently recovering demand, there are potential longer term influences related to a increased Chinese mill buying in response to policies such as 1) available Chinese import quota, 2) Chinese restrictions on sourcing of Australian cotton, and 3) potential impacts from U.S. sanctioning of cotton products from Xinjiang.  But these latter influences remain to be seen.

The rise and fall of ICE cotton futures has implications for potential hedging strategies.  The price volatility at the end of Q1 was a reminder why it is risky to hedge by selling futures — but it’s also made option premiums rather expensive.  as July’21 rose during February, an in-the-money 80 call option on July’21 increased in value from 3.71 cents (January 28) to 6.23 cents (February 4) to 7.34 cents (February 11) and to 11.87 cents per pound on February 25.  In general, an old crop call option represents insurance protection for those who purchased such an option earlier, in combination with cash contracting or selling futures.  This option premium (and insurance benefit) has lately declined with the reversals of the underlying futures, settling April 8 at 5.68 cents per pound.

For more details and data on Old Crop and New Crop fundamentals, plus other near term influences, follow these links. 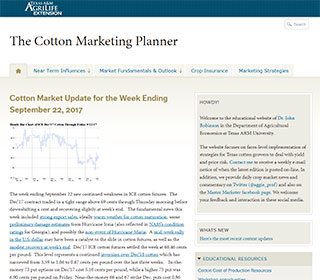