We have updated our Terms and Conditions and Privacy Policy with important information about our collection and use of your data and your data privacy options.
skip to main content
› Cotton Production › Cotton Production Research › Plant Pathology › Identification and Management of Bacterial Blight of Cotton

Bacterial Blight, also called Angular Leaf Spot, is a disease caused by the bacterium, Xanthomonas citri pv. malvacearum (“Xcm” will be used throughout this bulletin). Bacterial Blight was first described in the United States in 1891 and continues to be a major disease of cotton throughout the world. In the U.S., commercially-planted cotton seed undergoes a process called “acid delinting,” whereby the fibers that remain on the seed after ginning are removed by sulfuric acid. Before acid-delinted seed was the commercial standard, losses to Bacterial Blight in some severely affected fields were as high as 60%. Since acid delinting has been implemented, losses to Bacterial Blight have been estimated at approximately 0.1% annually. However, losses can be much greater in individual fields, with recent reports of 20% in isolated instances. Historically, losses observed in Texas and Oklahoma have been greatest; but in recent years, Bacterial Blight has become increasingly problematic throughout the humid region of the Cotton Belt. Twenty-two races of Xcm have been described. A pathogen’s race is defined by its ability to trigger susceptibility or resistance in different cotton varieties (and sometimes other plant species). Race 18 is the predominant race affecting cotton in the U.S. Should races other than 18 become more common, the effectiveness of the current, commercially-available resistant varieties may be negatively impacted.

Symptoms: Bacterial Blight starts as small, water-soaked lesions (spots) on leaves and can be observed on seedlings as well as mature plants. Lesions progress into characteristic angular shapes when the leaf veins restrict the bacterial movement (Fig. 1). Unlike many other lesions on cotton leaves that are more-or-less circular, those associated with Bacterial Blight are more triangular or rectangular, although shape can be more difficult to distinguish as the leaf ages. Bacterial Blight lesions may appear on the upper leaf surface; however, the water-soaked or “greasy” appearance of the lesions is often most clearly observed on the underside of the leaf (Fig. 2). When viewed on top of the leaf, lesions are sometimes encircled by a yellow ring or so-called “halo” (Fig. 3). 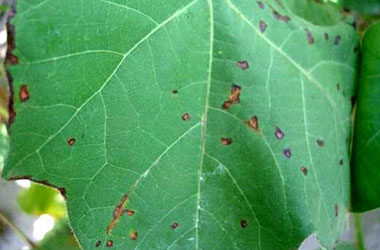 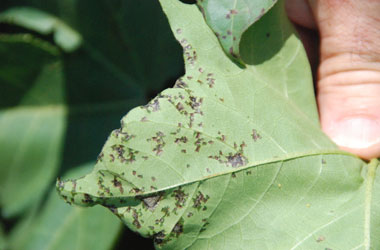 Fig. 2 —Bottom of an infected leaf 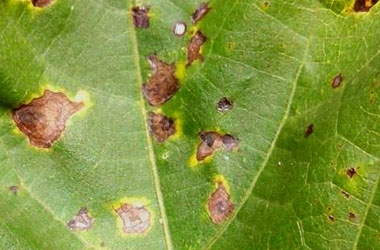 Lesions turn black as they age and increase in size. Often, the affected leaves will have a tattered appearance and premature defolia-tion occurs (Fig. 4). Systemic infections follow the main veins of the leaf and appear as black streaks that suggest the form of lightning bolts (Fig. 5). Leaf lesions caused by other organisms can be difficult to differentiate from those caused by Xcm. Lesions associated with Bacterial Blight are generally darker in color than lesions caused by many of the other cotton pathogens on those associated with herbicide injury. 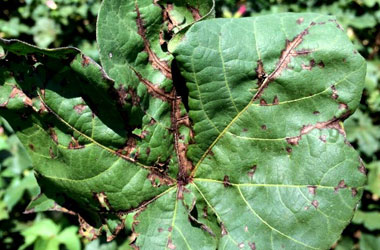 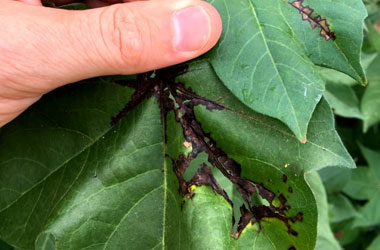 In advanced cases, symptoms called “black arm” develop where the infected leaf petioles and stems also exhibit dark lesions (Fig. 6). Symptoms may also appear on the bracts and the bolls. Symptoms on the bolls are characteristically water-soaked, greasy in appearance, and sunken lesions that turn black as they age or harbor secondary infections from other organisms (Figs. 7 & 8). Lesions associated with Bacterial Blight are often observed at the base of the boll where moisture collects beneath the leafy bracts and along the boll sutures where natural cracks and openings are easily colonized by the bacterium. Internal boll rot leading to lint discoloration and seed contamination can be associated with insect damage or infection by opportunistic fungal pathogens. Determining whether or not a boll was initially infected by Xcm or another pathogen or pest can be difficult once fungal pathogens colonize the wound and result in additional boll rot. 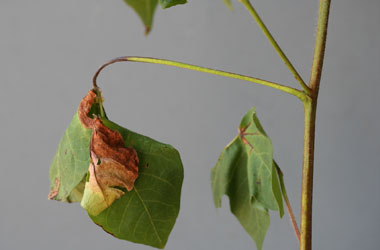 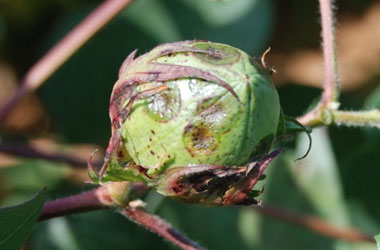 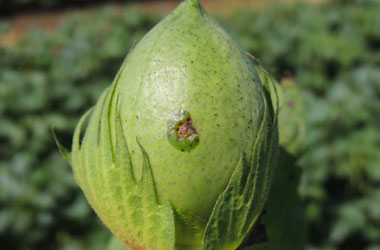 Field Introduction, Spread, and Survival of the Pathogen: Bacterial Blight infection of cotton fields may begin from infected crop residue from a previous season or be introduced on infected seed. The bacterium can survive in infested field debris and soil, though the duration of survival is not well understood and is likely affected by environmental conditions. Infections may be spread by wind-driven rain from an infested source or irrigation (furrow or sprinkler). Tools, tractors, and other equipment used in the field may spread Xcm.

Factors Associated with Outbreaks of Bacterial Blight: Bacterial Blight will be more severe in a field if the disease develops early in the season, especially if plants at the seedling stage become infected. The bacterium can enter the plant through openings such as stomates, lenticels and hydathodes, and wounds when plants are damaged by wind-blown sand.

Once Xcm is established in a field, rain-fall, especially shortly after planting, can lead to rapid increase and spread. After the canopy develops, periods of heavy rainfall followed by warm and humid conditions when relative humidity is greater than 85% further increases the development and spread of the Bacterial Blight. Throughout the season, conditions favorable for the development and spread of Bacterial Blight occur when daytime temperatures are 90-100 F and nighttime temperatures are at least 62-68 F. Under favorable conditions, it has been reported that one seed infected with Xcm out of 6,000 is sufficient to start a Bacterial Blight epidemic in a given field.

Management: The use of resistant cultivars is the most economical option to minimize yield losses from Bacterial Blight (Table 1). The recent increase in the incidence of Bacterial Blight has been linked to an increase in acreage planted to susceptible varieties (Figs. 9 & 10). Cotton growers can minimize their risk from Bacterial Blight by planting varieties that have some resistance to race 18. Growers should seek information on resistance to Bacterial Blight (and other diseases as well as plant parasitic nematodes) as they make seed-selection decisions. Incorporation of infected residue into the soil will help with decomposition of infected debris and result in death of the bacterium. Crop rotation will also help to reduce the amount of inoculum that survives between cotton crops. Fields with a known history of Bacterial Blight should be planted with a race 18-resistant variety. Economical chemical control options are not available. 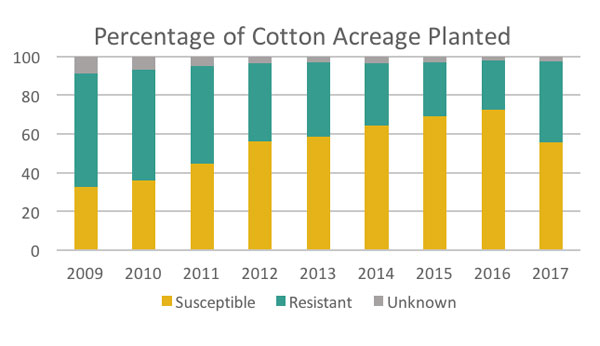 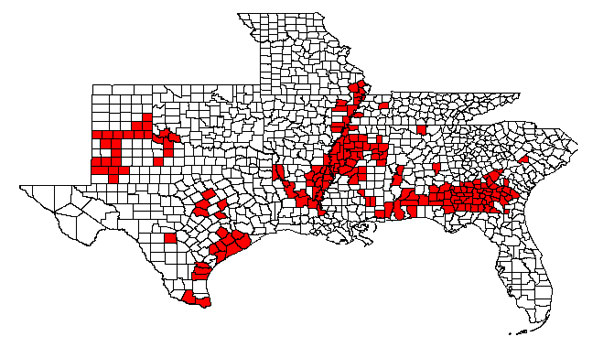