We have updated our Terms and Conditions and Privacy Policy with important information about our collection and use of your data and your data privacy options.
skip to main content
› Cotton Production › Cotton Production Research › Weed Management › Managing Glyphosate-Resistant Palmer Amaranth Research Meeting › Research Programs from Industry › Monsanto 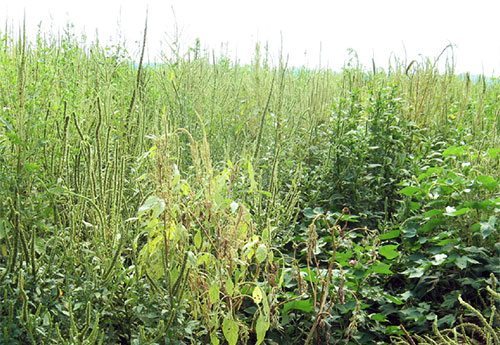 The resistance of weed populations to herbicides is being actively studied by Weed Scientists in industry, academia and US government. As Weed Scientists study weed resistance it is important that there be a standard way in which to compare the relative resistance between weed species to a single herbicide, between plants of the same species but collected from different fields or area and between different herbicides. This ability to compare allows Weed Scientists to come up with solutions to the problem in a faster way. During a roundtable discussion last winter in Little Rock Arkansas, several ideas were discussed on how best to report relative resistance.

Sammons presented ideas on a new way to standardize the measurement of herbicide resistance. Traditionally the magnitude of resistance is expressed as the amount of herbicide needed to kill 50% of the resistant plants (LD50) relative to the amount needed to kill 50% of the sensitive plants expressed as the R/S ratio. However, sensitive plants can give widely different results creating the impression of many different magnitudes of resistance. Therefore, resistance magnitude might be better described based on the recommended labeled rate of herbicide which is defined as the rate required to provide commercially acceptable control of a particular species. Sammons suggested using an R/L ratio (Rate for a resistant LD50 to a particular Label rate) to describe the magnitude of resistance in a problem weed species. He also encourages that we work with mortality curves rather than growth rate reduction (GR50) principally because when plant growth is reduced –even to 90%– the resistant plant is alive and may re-grow to set seed.

At present, the Monsanto recommendation for glyphosate-resistant Palmer amaranth in Roundup Ready Flex® cotton is to apply Roundup WeatherMAX® or Roundup PowerMAX™ + dicamba 21 days preplant, Cotoroan® at planting dependent on soil type; depending on weed pressure and timing Roundup with Parrlay™ before 8 leaf , and at layby Roundup + a residual appropriate to the weed spectrum and soil type.